An Icy Start to the Weekend 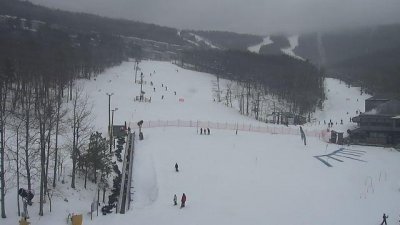 Well, this isn't the ideal way to start the weekend. Friday morning has brought some rather dreary conditions across the region. The expected freezing rain/sleet mixture didn't turn out to be all that bad here in the Boone area. The roads are easily navigable and a rain only event is expected for the rest of the day. It's not a ton of rain though so don't worry if you're headed to the slopes for the weekend. This underdeveloped snow is hardly putting a dent into the base depths.

I'm not sure how everyone else fared with the wintry mix, but I'm looking through the cams and it looks like everyone is in the same boat…a little nastiness but everything is still holding up fine. Massanutten and Wintergreen are actually showing a trace of new snow this morning and I must say, the base cam at Massanutten looks pretty good this morning. I really wanted to make it up there this year but I don't think it's going to happen. Next year! 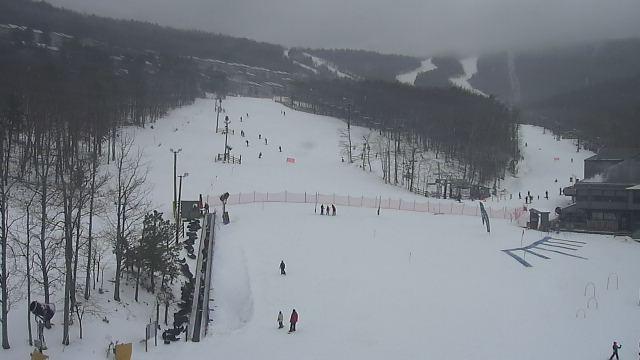 Appalachian Ski Mountain is the only other place that's showing some natural snow. They're reporting 1” overnight. They too are looking pretty good on the cam this morning. I might have to get out there next week and ride some park. A quick little note about App…they are current selling season passes for next season. The bonus with buying your pass now is that you'll get to ski or ride for free for the rest of this season. App is generally the last resort in the region to close so if you take advantage of this deal now, you'll be getting at least a month of skiing and riding for free. Check out all the details HERE.

Another busy weekend looks to be shaping up for the ski areas. My buddy was at Beech last night and he said there were already a ton of people out there for the night session. Almost all of them said they were there for the entire weekend. I'd imagine all of the other resorts are seeing similar crowds. The last 5 weeks or so has really been solid in terms of conditions and it's been pretty noticeable on the weekends how much busier it is this year than last. I don't have the inside information with the business folks that Mike does, but I'm almost positive this year can be proclaimed a success for just about everyone.

With these great conditions, it's been killing me lately to look at the cams during the week. Obviously, that's part of my job. I've been consistently seeing bluebird skies and great looking snow though. I love my job, but sometimes I miss the college days when I could just skip class and drive up from Charlotte, lap Beech for hours, and then head back down. I even skipped the first day of second semester once to get in a pow day.  Those were some good times.

Here's a random fact for you.  I am looking at the ski report and I've done some math.  I always like to look at the open trail counts to gauge just how good things are.  Right now,  330 out of 356 trails are open in the region.  I didn't count Liberty in there because they're always open.  That  means that 92% of terrain in the entire region is open for skiing and riding.  That's pretty cool.  Wolf is skewing that total a decent amount as they have half of those closed trails.  That kind of makes that figure even more impressive.

Most people know by now that the “Official Snowshoe Summit” has been cancelled due to various reasons. However, if you still are wanting to head up that way next weekend you should still go through with it!  A group of people from the messageboard and Mike and his family have all made plans to get up there. It'll still be a good time and it looks like snow is in the forecast for Snowshoe next week, so conditions should be primo. If you want to meet up with everyone, check out this thread over on the messageboard. Also, while you're at it you should just go ahead and buy the Ridiculous Pass. It really is a ridiculous deal.

That's all I have for today. Kind of short I know, but there really isn't too much to talk about. The weather is kind of sucky, but the snow is holding up just fine. I'm pretty optimistic that we have at least another month of the season left. Hopefully we get that huge snowstorm that Mike says we are still due for. Cross your fingers! Enjoy the weekend!