We Ain’t Afraid of No Ghosts…etc. 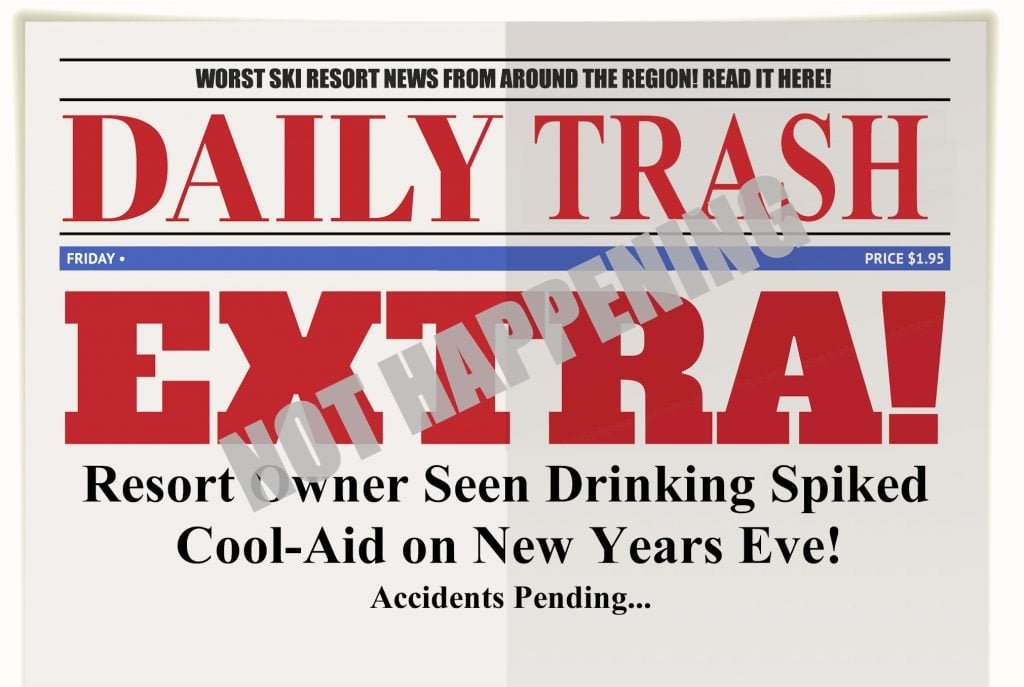 It’s been a nasty day in the neighborhood (region) with a lot of the mountaintops getting rain, freezing rain and generally yucky precip. We should see some back-side snow from this over the next few days.

Today, I am addressing some negative nellies who seem to have a bit of a misunderstanding of who SkiSoutheast is and what we believe our mission statement to be.

To begin…I should answer the question of WHY am I even addressing this when 95% of you, our readers, will be oblivious to what I am commenting on. After all, most of you come to this website to see “any good news” that we can share about what’s happening around the region on the slopes.

However, over the last six weeks or so there have been a few dozen people who have made numerous attempts to rant and rail against management at specific ski resorts (one in particular lately) and when we have suppressed that content, we have received repeated emails and Facebook posts that accuse us of:

…being scared to publish anything negative for fear of repercussion.
…being bought out or paid to tote the party line.

So our reason for posting this is to (hopefully) address it once online and then we can copy/paste our answers to future posters, emailers, etc. with a link to this page. (Saving time.)

Another round of railing occurred on Tuesday via Facebook and again we replied to it and attempted to use logic in our response – only to be accused (again) of being fearful of posting anything negative. Again the inference was made that SkiSoutheast is being “bought out” and therefore that would be the reason why we would suppress certain commentaries. After suppressing some content, I received several emails – burning more time than I care to share.

On Tuesday, one person even brought up another resort General Manager and our own, Joe Stevens – referencing how frustrated they must be with SkiSoutheast in that we won’t allow certain attack-style commentaries on this website.

I can only tell you that I have constant communications with Joe Stevens (at least twice a week) in his various roles as Spokesperson for the West Virginia Ski Areas Association and as a writer on staff – and while I can’t speak for Joe, I CAN share that he has not once discussed our stance on suppressing certain kinds of negative commentaries. I can also share that I have spoken with most of the region’s management and marketing staffers and they too seem to be appreciative of how we operate.

I have also attempted to handle responses via email in an effort to use logic to explain our stance and regardless of those efforts we continue to hear from people who seem to feel that they are in a better position to decide what the function of our website is and there are also those who feel that we “owe it to readers, to tell the truth” as if we aren’t already doing so.

Every few seasons it seems that there is a ski area or two that “fans” seem to want to rant and rail against about under performing.

This list of ‘discontent’ has included but not limited to:

…and the complaints go on and on and on and trust me when I share that over the years we have received thousands of such emails about every ski area in the region. This particular season, there have been three ski areas that have caught the most negative attention in terms of emails that we receive.

Now that we have entered the social media age, people seem to feel it necessary to vent those complaints anywhere and anytime they want…without thought as to whether they are truly warranted, fair, etc. They also don’t seem to care if those opinions effect whether someone else visits that resort, or maybe they DO and that is their intent (to harm the ski area in question).

SkiSoutheast.com is not here as a place to vent those frustrations…although it seems to be the consensus that we are, or that we should be. There is a time and place for everything, but this isn’t the place, nor is now the time. The place and the time might be via online review services like TripAdvisor or perhaps even our own messageboard – although we do have basic rules of proper etiquette that are mostly common sense with a healthy dose of the Golden Rule thrown in for good measure.

SkiSoutheast is NOT part of any association or organization. We don’t have any allegiances to any ski area (other than the fact that we love them all) and nor do we have any agreements in place that prohibits us from making negative commentaries. Lately I have personally fielded dozens of emails and Facebook messages that hinted that we are afraid to make negative comments about a ski area.

Over our 22+ seasons, we’ve written our fair share of rants. So there is no fear here in reporting.

What we are NOT going to do…is report opinions and especially opinions that are individually and negatively pointed at specific people…ie, owners or managers of a resort. Those opinions are often disguised as “not sharing this news is not good for the industry” etc. but we’re just not going to go there. End of story.

We could get into specific scenarios where people could argue that readers deserve to know if there are dangerous or tricky trails or dangerous employees working at a resort all under the guise that ‘someone is going to get hurt’, however, those are just opinions that may never surface.

If there are those of you out there that don’t like that, start your own website and go for it.

What IS Our Mission…?

We believe our job is to report and inform potential visitors as to what each resort has to offer in terms of amenities, trails open and the condition of those trails. We are not here to discuss the personal lives and actions of a resort owner or manager. We are not here to discuss lifts that might be thirty years old and that they might break down. Heck there are ferris wheels operating in the region that are 65 years old! We can talk about inspections all day long, but there are inherent risks in every adventure. At some point everything breaks.

What I have found through most of the negative posts and emails that I’ve read is that people are simply using anything that they can allude to in an effort to discredit an individual or a resort management crew or set of owners. They can put lipstick on that pig all they want, but to me the intent is clear. They aren’t happy with a person and they want to rail about them.

We are very aware of the fact that there are at least two anti-resort webpages out there currently railing against two different ski areas in the region. We’re not going to promote those pages by mentioning them here – other than saying that they exist. The intent of each of those pages is pretty obvious.

However, here at SkiSoutheast.com we choose NOT to participate in that kind of negativity. If we were to start down that path I can assure you that we’d be doing nothing but feeding the wolves that are circling at all times around most every ski area in the region. That would certainly not be of service to the industry or our readers.

So for those of you who still don’t get it…as simply as we can say this – we are not going to become a ‘tabloid style’, negative reporting service.

Time to move on. Nothing else to see here.

Previous Post
Not everyday is sunshine and rainbows
Next Post
Rainy This Morning. Cold Invading Today, Changing to Snow…