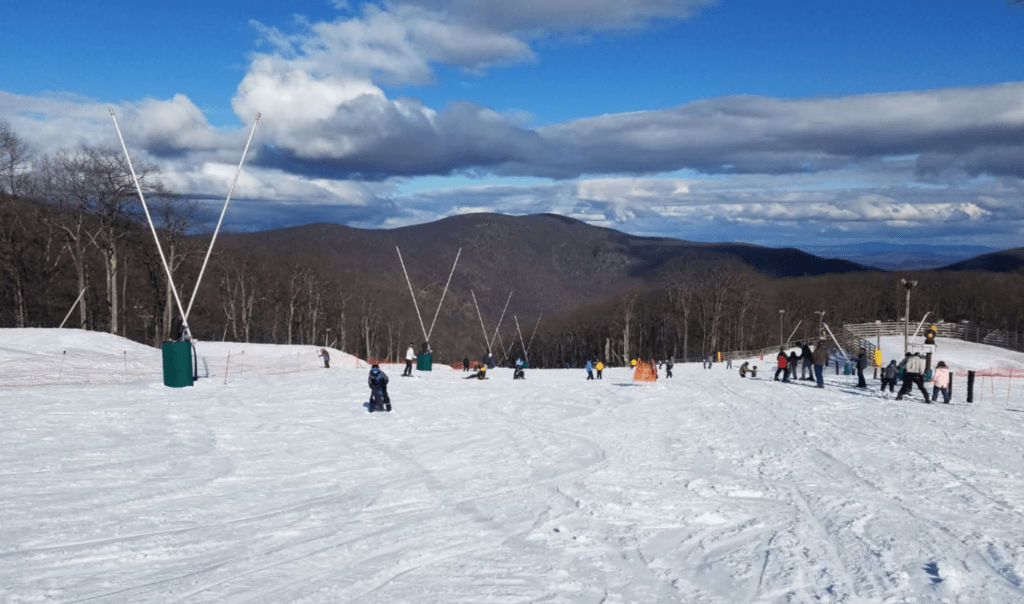 Story and Photos By Brian Dix

Howdy skiers and riders of the Southeast. Hope you all have had a chance to get on the slopes recently as the conditions have improved (greatly!). That early January thaw is in the rear view mirror and we are now in an excellent window of snow making. I know others have said it here before, but we all need to #ThankASnowMaker for the goods being served.

It is no secret that the goods become great when the runs being covered are diverse, spread out, and complimented by some high capacity high speed lifts. One such place that offers all of that is Wintergreen Resort in the beautiful Blue Ridge Mountains of Virginia. 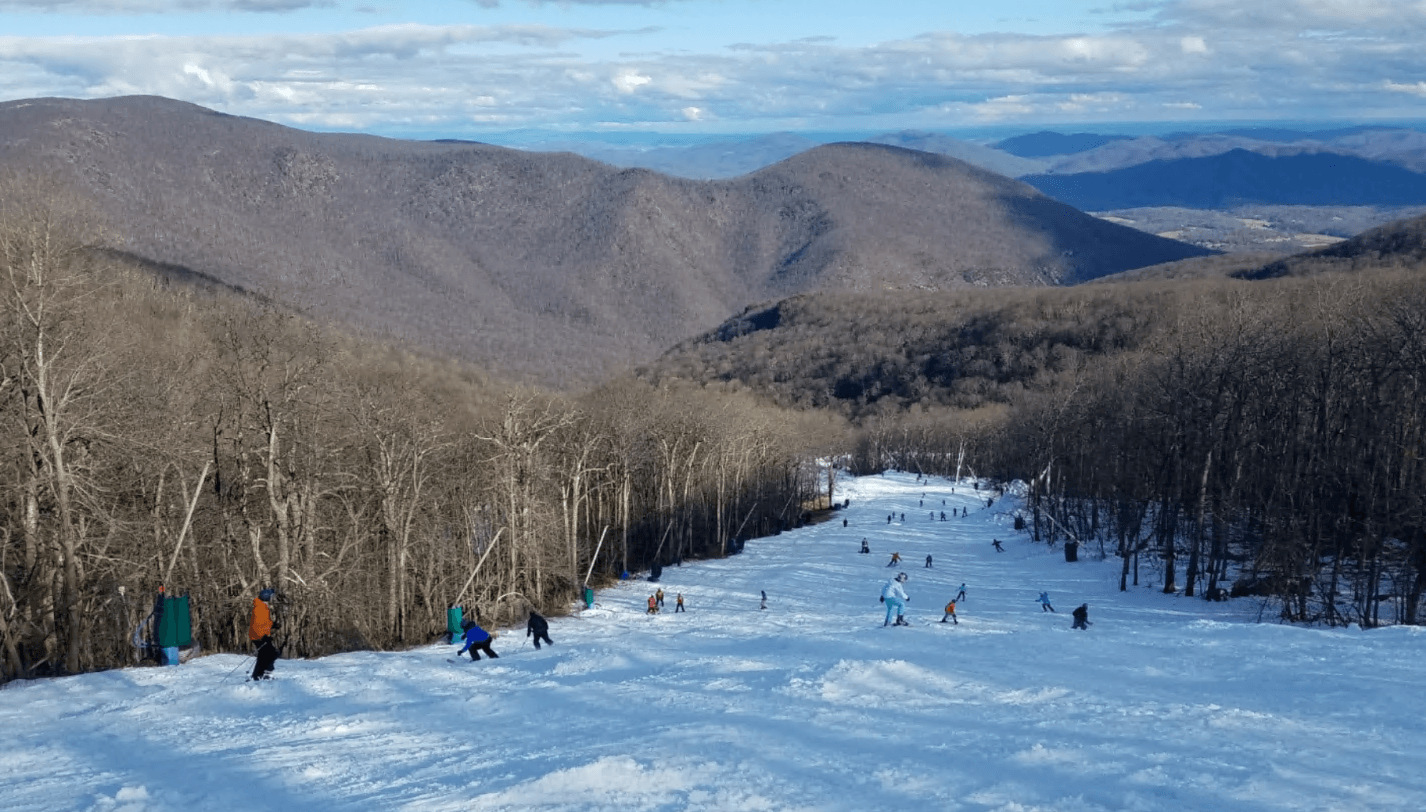 If you have never been to Wintergreen Resort you are missing out. This place has a lot of unique charm, but probably the coolest uniqueness puts this resort on a very rare list of ski resorts in the United States. That is because Wintergreen is an inverted ski resort where the amenities and parking lots are on the summit and the runs are down below. This setup is for good reason too, as the higher elevation of 3,850 ft. gets colder and has the most spectacular views. Just be careful on the drive up and down the mountain once you exit Highway 151 as the grade gets steep and the curves can be sharp.

Here is another fun fact to consider. The listed latitude of Wintergreen Resort on Google is 37.9299 degrees North, which means if you head precisely west for a little over 1,800 miles and you would be skiing or snowboarding again on another well known resort called Telluride. I hear they have high capacity high speed lifts there too.

Once you have reached the top you will need to be prepared for some walking, which can be a challenge in ski boots. Wintergreen is a true resort that has condos, a main lodge, rental shops, restaurants, etc. that comes with a lot of concrete. I have a pair of Cat Tracks for my ski boots specifically for situations like this. Cat Tracks are pieces of rubber that stretch to cover the bottom of your ski boot from the tip of the toes to the heel lip. Not only do Cat Tracks provide a softer feel while walking overall, they also provide a layer of protection from wear and tear. I highly recommend a set of them if you own your own gear.

One big difference between Wintergreen Resort and almost everywhere else in the nation is the value for the experience. Most of the people I shared a chair lift ride up with had an added financial bonus from the Mission Four’dable quad pack deal offered in December for $209. The general consensus I heard what that this great deal is a very welcomed financial break, and it even incentivized some folks to get back to skiing for the first time in several years. I overheard one guy claim that it has been 25 years in the making, but there he was.

As for the skiing itself they had just enough terrain opened to really spread the crowd out. A game changer for me was when they announced the opening of the Highlands Express Chair Lift, because it only serves expert terrain. I personally like it when a ski resort has some separation between the abilities of skiers and riders at any time. Last thing anybody wants is being overwhelmed too soon by a run that is too much to handle. You can set your goals out as to where you feel the most comfortable and gradually work your way up to the most challenging terrain. Also, this lift moves incredibly fast, holds six people per seat, and climbs a vertical of 1,003 feet. That combo reduces the lift lines to almost non existent level. More chances for more turns are what make the quads burn. I really enjoyed the sight of a small lift line as I descended down Lower Wild Turkey time and time again. 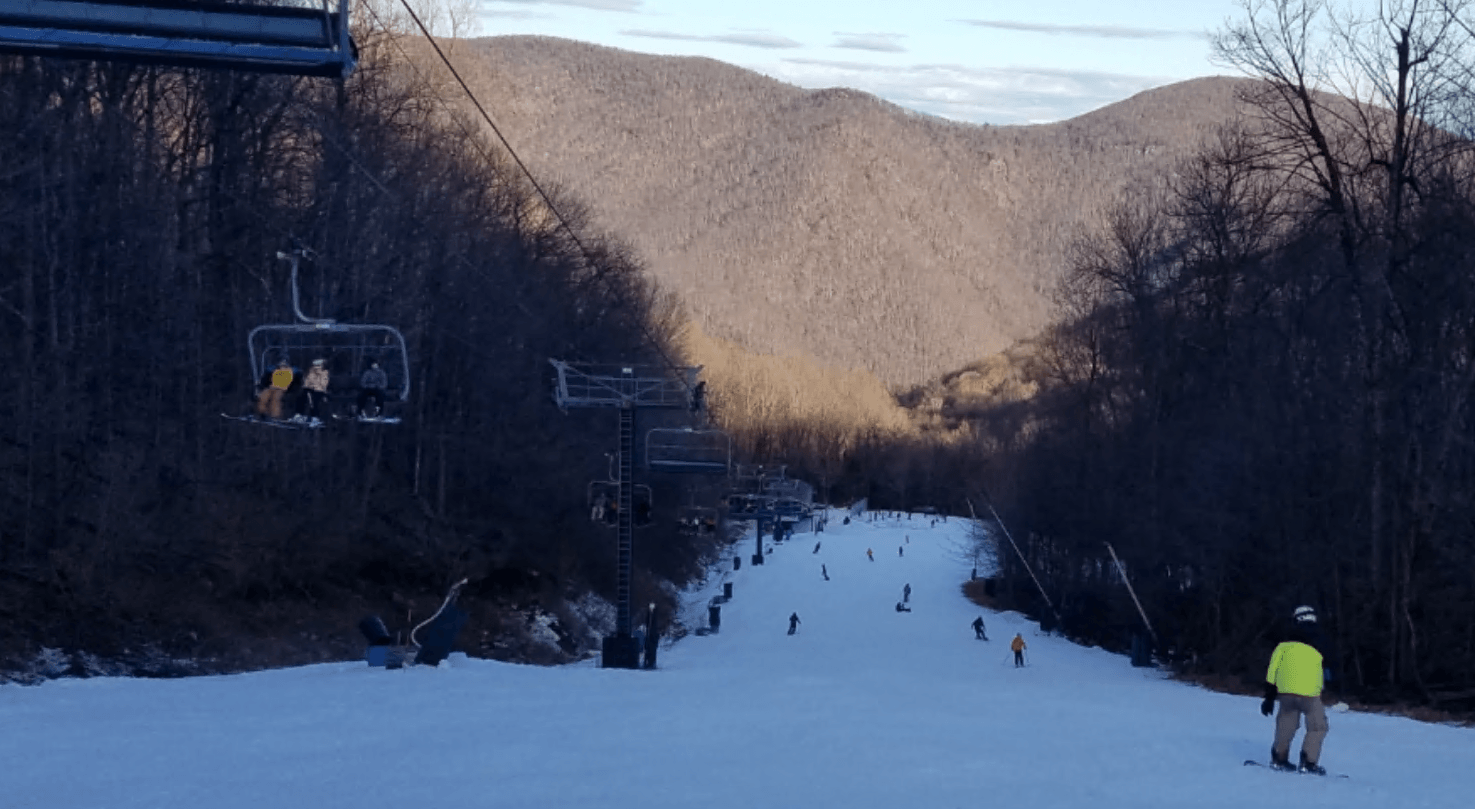 I wish I could report the same for the other lifts, but that simply was not the case, especially for the Blue Ridge Express. This lift is the heart of the resort as it is the most accessible to get to, and it is the best lift to ride if you want to back to the main lodge. In spite of the larger crowd the chair lift crew did a fantastic job keeping folks on move while riding a full seat of six people at a time. Another plus is this lift offers some excellent green runs for beginners to practice their craft and a few terrain park features for those who want a little separation from the ground below. They also have lights installed for night skiing here too.

However, my intentions were to go past that lift and make my way to another part that also has night skiing on some runs, which is the Big Acorn Chair Lift. What I enjoy most about this part of the resort is that you have to go through a tunnel to get there, which is another rarity for a ski resort to have. 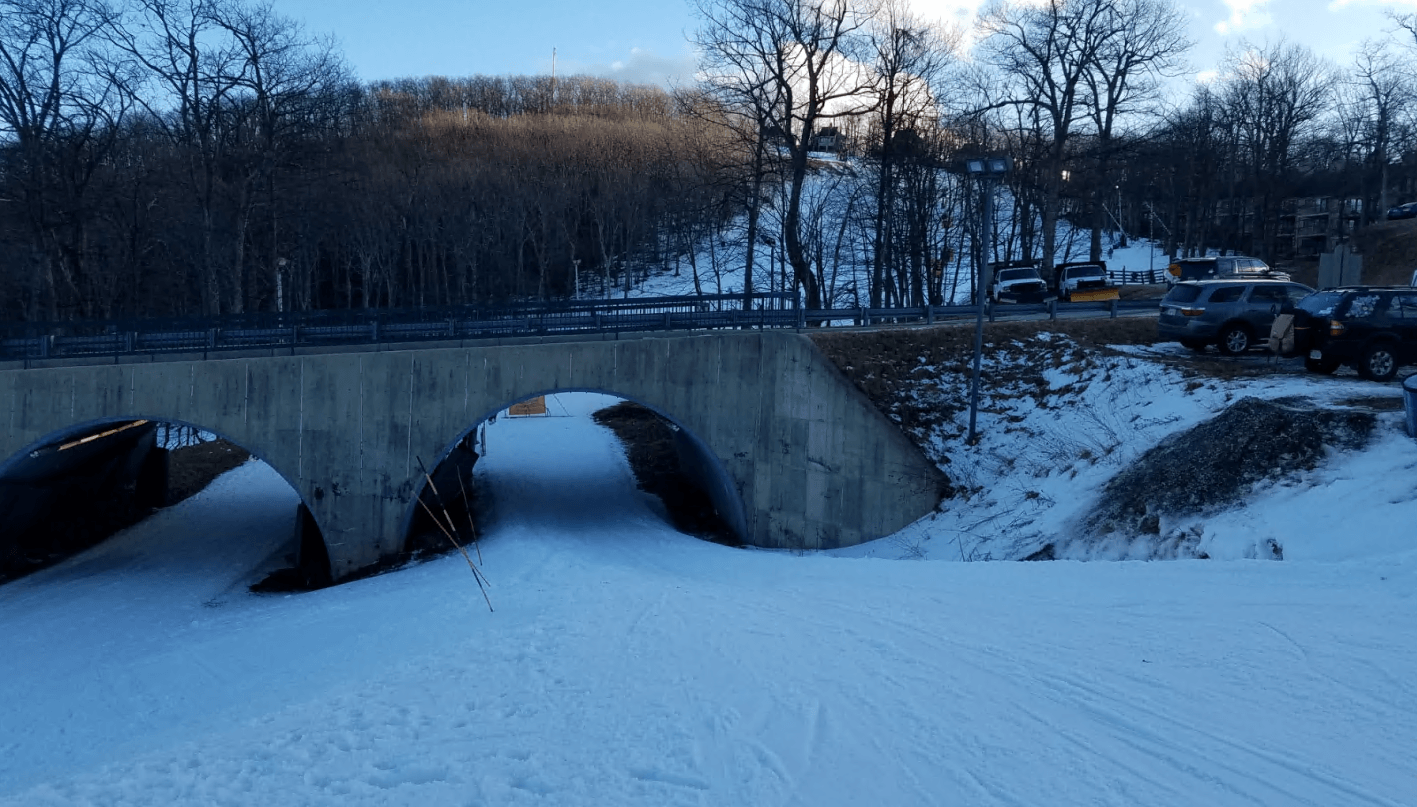 Once on the other side you will be greeted by a few blue and black level runs. The scenery here is some of the best offered at the resort, and if you were to exit the lift on the left to head down Tyro or Upper Sunrise you will see what I mean. I was there late afternoon and I caught a few glimpse of the shadows creeping over the surrounding peaks. 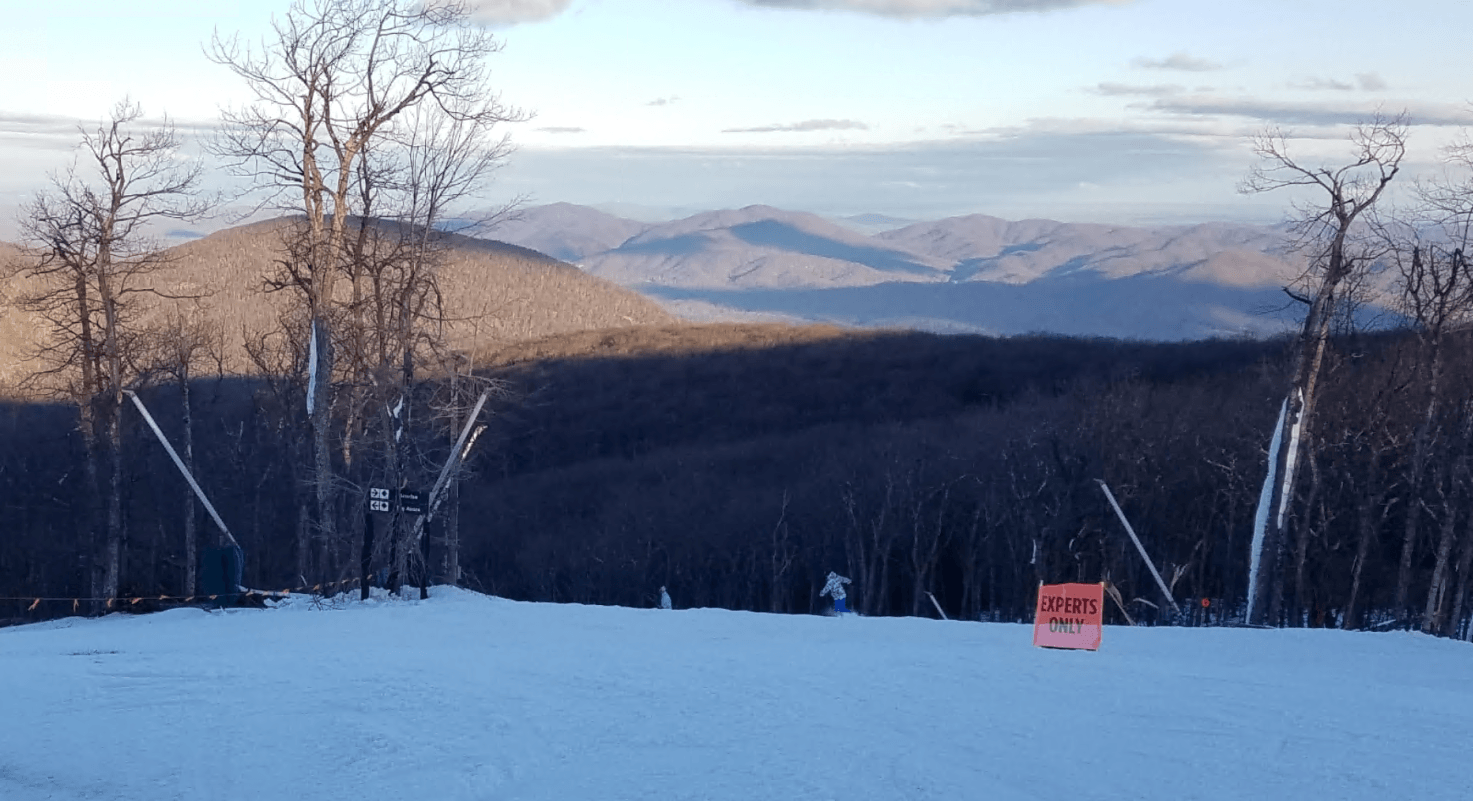 One down side about the timing of my ski day was that one of the runs over here, Eagle Swoop, had some unfortunate bald spots showing. The trail maintenance crew did a great job roping off the worst sections, but that made this normally wide trail much narrower. No need to worry though, as this recent cold air has given them plenty of opportunity to cover it all up and make it full side-to-side coverage again.

So if you’re looking for an adventure on the slopes in the Southeast give Wintergreen Resort some consideration. This place is near the DC / Baltimore area, but can still be reached by other metropolitans such as Raleigh and Charlotte. Add in the affordable lift tickets complimented by the varied levels of terrain that is spread out, and you too could have some sore quads a few days later. The good kind of sore quads which become less and less sore as your ski or ride season carries on.