A Wet Sunday and THEN the Return to Winter Temperatures and SNOW!

More consistent cold and some snow is in the forecast for the week ahead. Snowmaking temperatures make a return and base depth will begin to rise again and the quality of the product that we’re riding will be much improved although we’ve received a lot of reports that things are pretty good out there despite this current string of 11 straight days of milder-than-desired and wet weather. 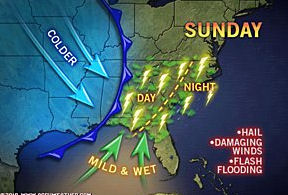 The bad news is that we’ll have to weather one more day of it as we’re expecting an inch or more of rain today across the Southeast and Mid Atlantic with some pockets of perhaps 2-3 inches. There are flash flood watches being issued by the National Weather Service and you never want to see that mentioned in your forecast any time of the year, but particularly not in a winter forecast. So we’ll see some more base depth drops of another few inches before things turn for the better later on Monday.

There’s so much snow on the mountains of the region today that they will all weather today’s yuck pretty well. Last year a string of eleven days like we’ve had this past week and a half would have produced fields of grass and mud on some slopes and trails. Not so today. There’s some thin areas on some terrain but really not much.

Some blustery winds will accompany today’s rain so Sunday skiing and snowboarding will P-R-O-B-A-B-L-Y be for the diehards and those who already are here with groups and figured "what the heck" hit the snow anyway.

Note: Some of the ski areas into West Virginia won’t see the rain begin until around noon.

ONE CANCELLATION DUE TO THE WEATHER

The High Country Juniors Races scheduled for today at Beech Mountain have been postponed due to weather conditions. An announcement will be made and posted asap as to when they can get those races rescheduled.

So back to today…

If you’re skiing or snowboarding today, take your camera or video equipment as you might catch a rare photo of lightning in the area (during the winter). Thunderstorms are in today’s forecast. The rains should clear out later and then Monday should be nice with the colder air and some snow coming in later in the evening on Monday. Lows are expected to drop to near 20° at most mountain locations Monday night. We’ll see some blustery winds Monday night through Wednesday morning but along with those winds we will see the snowguns cranking up and highs Tuesday in the 20s with lows in the teens. There should be 2" or so of snow in the North Carolina mountains from Monday evening through Wednesday and more further north. Snow is in the forcast ALREADY for Friday and Saturday (next weekend) so if you’ve been holding out these last eleven days for some colder and snowier weather and more pristine conditions – then next weekend is for you!

WHAT IS IT WITH SOME WEATHER GURUS?

I’m not going to name names here (at least not unless provoked to do so), but I just read a blowhard of a forecast that for what seems like the tenth time this season – first put down some of our region’s meteorologists and then recreated history by claiming that his forecast was the only one that forecasted some freezing drizzle overnight. First, the forecaster in question seems to often re-write his forecast successes 24 hours after missing forecasts, and is constantly writing derogatory comments about professionals within our region who do as good a job as any out there.

I’d take Eric Thomas of WBTV, Brad Panovich of WCNC, Greg Fishel of WRAL, Lanie Pope of WXII, Steve Udelson of WSOC, Jason Boyer of WLOS in Johnson City or dozens of others around our region over some guy who seems more bent on talking down to these guys than actually just doing his job.

I know that Chief Meteorologist Brad Panovich has been amazingly accurate with his forecasts here this season. I also know that the weather guru I’m griping on this morning has missed more than a handful of snow events already this season…until the day after it snowed when he claimed to have forecasted it! (Remember, we archive EVERYTHING on the site!)

Most of us will argue that forecasters "never get it right" and we’re always left disappointed when we don’t get that foot of snow that was forecasted. To paraphrase Edward Lorenz, what’s amazing isn’t that the meteorologists botch so many forecasts, but that they occasionally get some right.

If you’re a weather forecaster yourself it would seem that you’d be prone to support each other rather than throw consistent barbs at those in the region who are actually professional meteorologists.

So to "Mr. Weather" who will, no doubt, read this post (I know he reads us often) – get over yourself and join the fraternity of those who are never praised when they get it right and jumped on when they get it wrong. It’s a thankless job in many ways, but real meteorologists love what they do and they do it pretty darn well these days – at least 72 hours and in.

BASE DEPTHS CONTINUE TO FALL BUT…

You know you had a great December to mid January weather-wise when you can report a drop of 29" in base depth in just the last 11 days and STILL have from 5.5 to nearly EIGHT FEET of snow on your slopes and trails. That is the case in Appalachian Ski Mountain. We’ve been tracking base depth reporting (and in some cases non reporting) and hats off to the resorts within the first group beliow. They’ve all provided consistent, daily updates in reporting all aspects of a daily snow report, which includes reporting base depth changes. It is no wonder why so many national and regional newspapers and reporters crack on the "fudging of snow depth" when some ski areas don’t reflect changes after the kind of mild and wet weather we’ve had in the last 11 days.

Our ski areas are in very nice shape with plenty of snow and very good, side-to-side coverage with very little to NO bare spots on trails and slopes, so we’re good there. However, snow doesn’t just melt at the resorts that have done a nice job of reporting.  It doesn’t take but a second to reflect accurate base conditions – DAILY – so we’d like to see that as an improvement to those that just are not paying attention.

In the last eleven days since January 13th here’s what we can report about reported base depths across the region:

Shame on these resorts that have reported NO CHANGE in the last 11 days!)

I loved the Massanutten Resort tubing report this morning. It reported "FAST" conditions! I’ll bet those bad boys can FLY when wetted down with some rain!

I also loved Snowshoe’s Laura Parquette’s advice this morning, "The secret for today is going to be to get out early, as yesterday’s lingering grey clouds are forecasted to start dropping some rain on us later this afternoon. So swing by Starbucks and get that necessary shot of caffeine and hit the slopes as early as possible."

I really like Wisp Resort’s newest addition that includes the open trail and lift count on the front of the website. In the past they didn’t even have that on the snow report page. You had to look down the list and count for open trails. Good for them to add that feature.

We’re on day 58 and there are 79 more days of opportunities to enjoy the snow for the 2009-2010 ski and snowboarding season!

That’s it for today. Check out the Snow Report at https://www.skisoutheast.com/skireports.php and please send us your favorite ski photos, ski videos, trip reports and comments to  [email protected]

Previous Post
Saturday is a Great Day to Ski or Ride – Sunday, not so much!
Next Post
Witt Graham Snowboards at Appalachian this Weekend! Pants on the Ground, pants on the ground, hat turned sideways…