A Successful President’s Day Weekend It Was 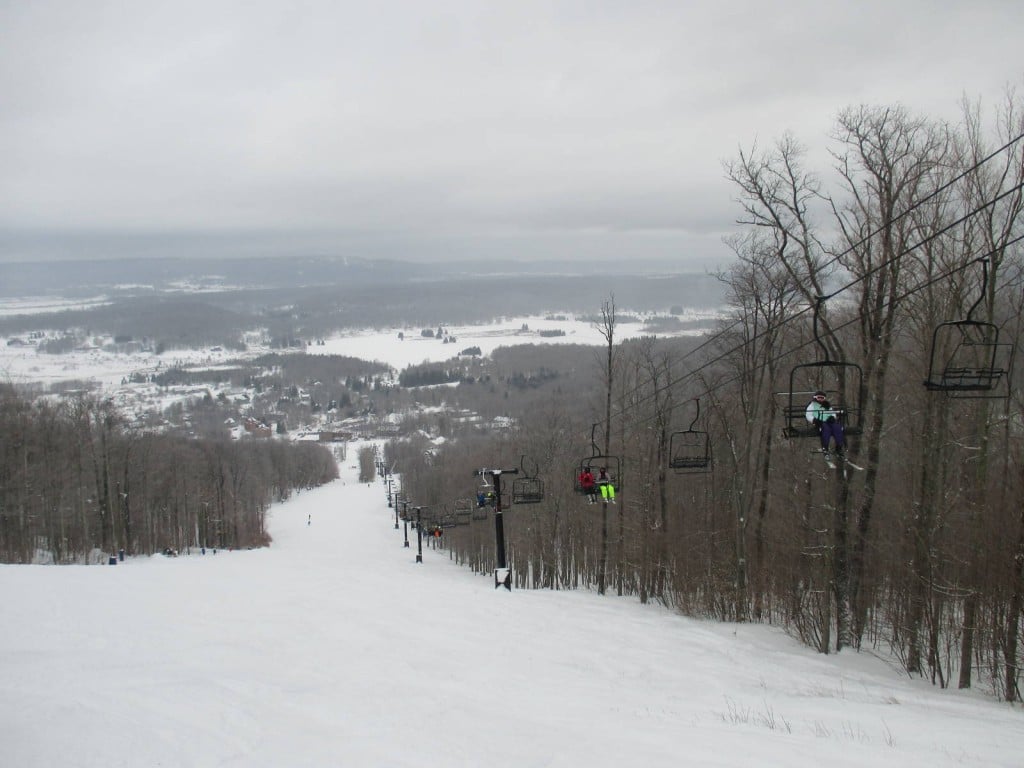 What. A. Weekend.  I don’t think the resorts or visitors could have asked for much better in terms of conditions, except for a possibly drier day yesterday afternoon.  The weekend started out with a bit of snow, Saturday and Sunday saw frigid cold, and then Monday morning saw some more snow as well.  As Mike said yesterday, two out of three ain’t bad.  Christmas was a bust, but MLK and President’s Day Weekend definitely delivered.

Admittedly, I weenied out on Saturday and ended up staying home.  Those negative 20 degree wind chills just weren’t doing it for me and my bed was nice and warm.  I did make it up to Sugar Mountain yesterday though and it was an interesting day to say the least.  This was one of those storms that produced some highly variable temperatures even over the shortest of distances.  The drive up to Boone consisted of slightly above freezing temperatures and freezing rain/sleet.  As soon as we got up the mountain on Highway 421 and into Deep Gap the temperature was 18 degrees and it was dumping snow.  Ten minutes later we were in Boone and it was still dumping snow with a temperature of 21.

Here’s where it got crazy.  As we drove down Highway 105 and into Foscoe the temperature went from 21 to 35 degrees in the span of 5 or 6 minutes.  It went from heavy snow to rain.  They call it “No Snow Foscoe” for a reason.  Luckily, as we went higher in elevation to Banner Elk the temperature dropped to just below freezing again and it was all snow by the time we got to Sugar.

Sugar was good.  Visibility was pretty poor from about mid-mountain up, but there was a nice layer of snow on top in the morning that made for a good time.  They were reporting 3″ and I’d say that was spot on.  My buddy THAHATTER from the messageboard captured a couple of faceshots.

All in all it was a great time.  After about 11 or so we did start to have periods of light rain, but it wasn’t bad at all.  By noon my legs were worked a bit after hot lapping all morning, so I took it a little slower and found mostly untouched snow on the sides of Gunther’s Way that provided some creamy, soft turns.  Very enjoyable.

I’m not going to lie, I was somewhat surprised to see that the Virginia resorts saw 3-5″ of snow.  The NWS forecast wasn’t calling for that I thought but indeed they woke up yesterday to a nice layer of snow on the ground.  Meimei Ma was at Massanutten and here’s what she had to say…

It was definitely a powder day at Massanutten, at least until about 2pm.  Once the freezing rain started, it was time to give it up.  Have a friend who is staying at Mnut all week who stayed until about 4pm.  I started driving south to Raleigh around 2:30 since my friend’s kids have school on Tuesday.  We beat the freezing rain so the drive down US29 wasn’t that bad.

Mnut decided around 1pm to close early at 5pm because of the forecast for a lot of freezing rain.  They closed the waterpark early too.

Didn’t get any good pics of powder tracks.  Didn’t want to stop too often to take pics either.  First one is from 9am when we got to the lodge.  Second is Paradice.  The left side of Paradice and DJ were left ungroomed per usual.  Felt like a lot more than 5 inches in places.  Once the snow was packed down a bit, the bumps on MakAttack were quite fun with the icy patches covered up by the fresh snow. 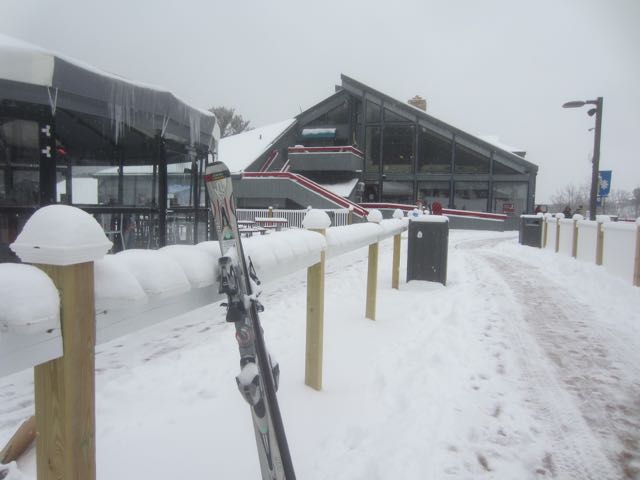 The base of Massanutten yesterday morning. 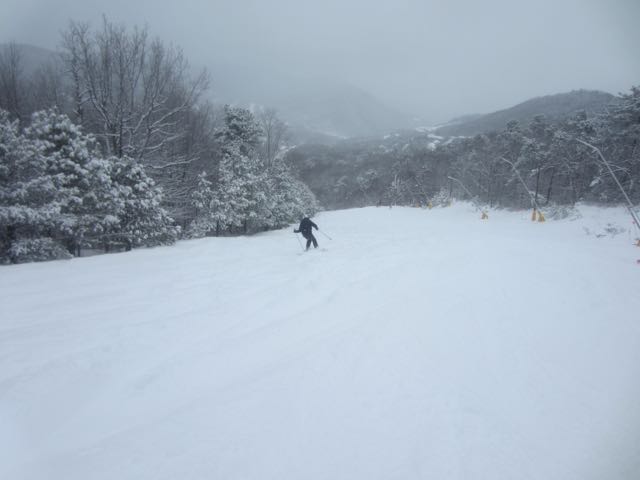 Looks like a nice layer of powder on the slopes!

David McCue made it back up to Davis, West Virginia and hit up Timberline on Sunday and Monday.  From the tone of his email, it looks like he was a little bummed on the rain that fell yesterday, but that dude is used to getting powder.  Either way, the images he sent look really good and Timberline has seen about 5 inches over the last 48 hours. 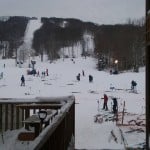 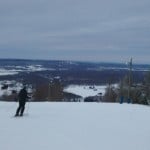 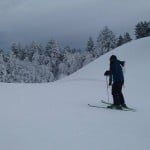 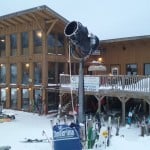 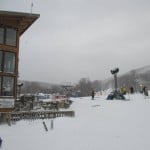 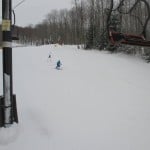 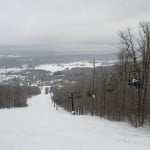 The overall theme of yesterday was it was good in the morning, with a changeover freezing rain/sleet by midday.  So if you got out early for first chair, you were treated to some fresh snow for a few hours.  Unfortunately, those warmer temperatures moved in and some freezing rain did fall yesterday afternoon and into the evening hours.  Then it poured rain overnight.  There’s no way to sugar coat that.  Luckily, that rain happened on the tail end of the holiday weekend and it’s going to move out today.  The North Carolina ski areas are all clear of precip this morning, but the rain is still hanging around up in Virginia and West Virginia for the time being.  And it’s foggy just about everywhere right now.

The good news is that a quick moving system will bring back snow tonight.  It’s not a huge event, but a couple of inches are possible for the North Carolina and West Virginia ski areas.  Here’s the NWS forecast for the next 36 hours below. 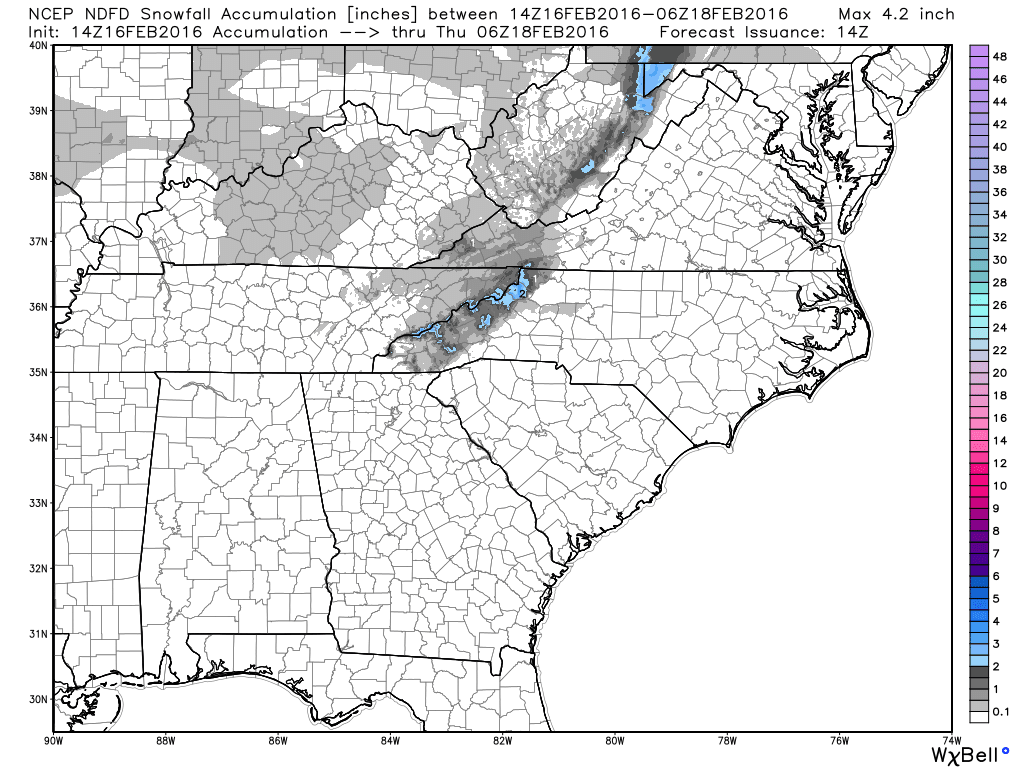 Tomorrow is going to be cold so the snow that does fall should be there waiting for you all day.  The rest of the week looks to see a gradual warming trend, but we’ll talk more about that as the week goes on.  I will say that the weekend looks fantastic right now.

Snowshoe has begun to sell The Ridiculous Pass.  For those that don’t know what it is, it’s a ridiculously good deal on a season pass, hence the name.

From February 16th through the 21st, Snowshoe’s 2016/17 Unlimited Season Pass is available starting at just $219. However, only a limited number are available at this price, so don’t delay. Once each tier sells out, the cost will go up by $10 and max out at $249 (until the sale ends). Wait, it gets better. Remember, the Ridiculous Pass is also good for March of this season, so you get to use it right away. Pretty ridiculous, right? 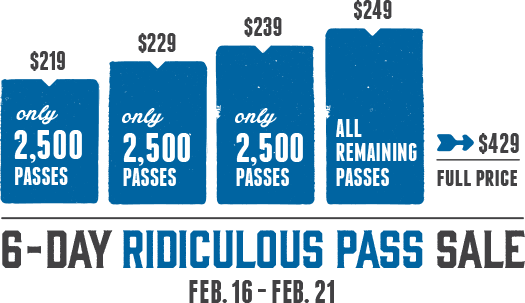 Joe Stevens posted his weekly article yesterday, and I must say I’m a big fan of this one.  In it he talks about how the rise of social media has led to an increase in misleading weather information.  This topic is a pretty big deal in the meteorological community right now as the amount of BS “forecasts” that come out on social media with every single winter storm seems to be on the increase.  People hear what they want to hear, so making sure they get the proper information from valid sources is crucial.  Anyways, give it a read by clicking the link below.

Welp, it’s back to the grind now.  At least it’s only a four day week!