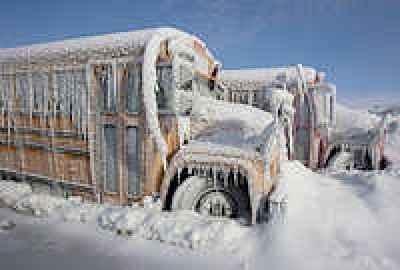 In what will no doubt be the first of many stories that we will be posting about the weather forecast for the upcoming 2012-2013 ski and snowboarding season – we have some potentially GREAT news to share. 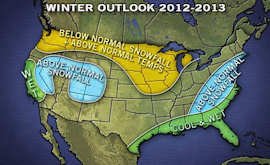 I emailed to get permission to post portions of this story, so I don’t want to immediately alienate the folks at Accuweather, however it is obviously very difficult to start predicting what this winter will be like in August. Accuweather’s 10 day forecasts have often been maligned. However in terms of their long range forecasting – they’ve actually been pretty spot on over the last few seasons. Meteorologist Joe Bastardi is usually one of the first to "risk" a prediction. According to the long range expert, Bastardi believes there is a significant chance for particularly frigid winters in 2012-2013 and 2013-2014 into 2014-2015.

Bastardi said these winters could be similar to winters of the late 1970s.

He said, "While the most consistent of the cold is to the north, severe bouts of cold deep into Texas and Florida would be capable of affecting agriculture more so than we’ve seen in that last 20 years or so."

A combination of factors that parallel the precursors to historically cold winters is leading Bastardi to this forecast.

Accuweather’s Meteorologist Meghan Evans stated on Thursday, August 16th, "Following a snow drought during winter 2011-2012, the mid-Atlantic and southern New England will get a snow dump this winter."

She goes on to report that Long-Range meteorologists are projecting a weak to moderate El Niño by the fall.

So as things look right now, we should start seeing chipmunks begin to scurry around to pack up a strong stash of acorns for this coming "snowmageddon".

Bastardi is one of the more respected meteorologists nationally and if you look at his comments about this coming season and that of 2013-2014, and beyond – he’s definately not one of the proponents of "climate change" or what was previously called "global warming". He writes, "In the longer term, this is all part of a cyclical event which will return the earth’s temperatures by 2030 back to where they were in the late ’70s at the end of the last cold PDO [Pacific Decadal Oscillation, or El Ninolike pattern] and the beginning of the satellite era of measuring temperatures objectively."

Other long-range forecasts are beginning to come our way and as we get them, you know we’ll share them. By the way, expect The AccuWeather Full-Length Winter Forecast to be released in October.

Email me your thought at: [email protected]

Previous Post
AccuWeather Predicts a SNOW DUMP this Winter!
Next Post
We’re Scurringly Around More than the Chipmunks and Groundhogs Right now!