A Novel of Information for you guys today!

As I was walking upstairs I was thinking, "With the weather we’re having, what in the world can I write about today?" I envisioned that I’d get a sentence or two written and be stuck. However as you will see, there’s a novel to read today!

You guys want to see what kind of crazy winter we’re in the midst of?

Simply check out the disparity of forecasted temps for the upcoming week between Gatlinburg, Tennessee and Snowshoe, West Virginia. It is amazing that Ober has been able to keep decent conditions on their hill. Yet they have.

Do you even see any snowmaking temps in that forecast? 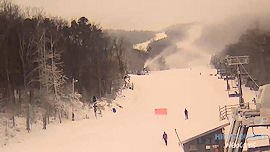 Massanutten is making snow (this photo looks like one of those old sepia or monochrome photos, huh?>>>

Lately we’ve seen a weather pattern that has been holding the milder air in place across the North Carolina and Tennessee mountains and allowing some of the coldest air in the region to filter all the way into Virginia…giving Bryce, Massanutten and Wintergreen some snowmaking temps. Snowshoe, Timberline, Canaan, Winterplace and Wisp resorts are all in the cold air as well and most all have been able to take advantage of those temps to make snow.

That pattern is still in place as we’re seeing the following lows this morning:

Isn’t it amazing really to be able to visualize where the cold air is being allowed to filter into? There’s a 30° difference in temps this morning from Ober to Canaan and nearly a 10° difference in temps across the Virginia, West Virginia and Maryland mountains than those across the North Carolina mountains – which is unusual. However that "unusual" trend has been occurring often this winter.

By simply glancing at this morning’s temps, you can also tell which ski areas made snow and probably where the best conditions are…although to be honest, there’s plenty of side-to-side coverage at all of the ski areas again today.

All of the North Carolina ski areas reported drops in their base depths in the last 72 hours. Most dropped from 2-4" since Saturday AMs report.

However, AGAIN, they have plenty of base and good conditions.

<We snapped six images and animated this "bolt from heaven" that appeared in the Cataloochee WebCam this morning!

The view of the Ski Area from Hemphill Bald camera at Cataloochee has been impressing visitors since it’s debut. However as some cloud cover began to clear this morning, we caught these images and animated them for you guys!

Cataloochee Ski Area has put in three webcams of late that all operate on posting a static image every 30 seconds or so, but they are great shots and we’ve used them many times on our reports over the last several years! 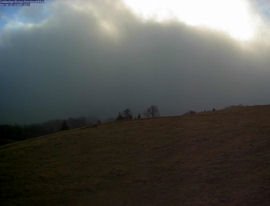 By the way, HERE is what the Hemphill Bald photos NORMALLY looks like!>>>

The Virginia ski resorts reported NO drops in base but again it HAS been colder in Virginia than further south, which is unusual, but that’s the way this winter has been – unusual! Massanutten and Wintergreen Resorts are making snow! 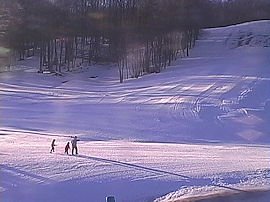 Talking about being a strange winter. While it’s definately been considered by EVERYONE to be a winter that has shown a lack of snow, something that would seem to contradict that would be around Davis, West Virginia where it has snowed on 14 of the last 22 days! In fact there’s been 32.8" of snow up there so far in January and 73.3" on the season.

Snowshoe Mountain – 26° and making snow on unopened trails with a base of 24-48" – They have 53 of 60 Trails Open. Snowshoe’s marketing peeps wrote, "This has been a great week for terrain expansion at Snowshoe, with our on-snow team adding 50 acres to our total since Monday morning. With Upper Shay’s and Widowmaker having opened this week, along with Cupp and more, we’ve got some fantastic advanced trails open. Come see for yourself!"

Timberline Resort – 27° and making snow on 4 trails with a base of 51" and 26 of 40 Trails open for day sessions only. It was pretty crowded at the base of Timberline at 9:07am viewed from the webcam!

Winterplace Resort – 29° and no snowmaking – 25 of 27 Trails Open with a base of 30-52". It is foggy at Winterplace this morning but BOY oh BOY have we had a lot of people email us about how great the LIVE cam is at Winterplace! Check it out at: http://www.highcountrywebcams.com/webcameras_winterplace.htm

Wisp Resort – 23° and making snow – 25 of 32 Trails Open but Squirrel Cage is closed for a race event. They have a base of 20" Too bad they don’t have a streaming cam on that hill. That would be cool!

Ober Gatlinburg – 50° – 6 of 9 Trails Open – Ober gets the obvious vote for doing the most with the least this winter. They’ve had 2" of natural snow and more mild days than cold and yet they managed to keep decent conditions on the mountain. They are hosting a "Pop the Highest Ollie" contest at 1pm today. Tubing and skating are open as well.

SOUTHEAST AND MID ATLANTIC SNOW MAKING CREWS ARE THE BEST

I think that this website has done more to praise and promote the snowmaking crews at our region’s ski areas than any other source around. Case in point – I have really been amazed at how good the conditions are despite the challenging weather across the area. I figured I’d do another little "mention" of that fact and since I’ve written so much about it that I’d look into some data that would allow me to write something different. So I Googled "Southeast Snow Making" and FIVE of the first TEN website links are from us!

Since we’re THE DEFINATIVE RESOURCE of information about snowmaking in the Southeast, I guess we’ll just leave it at this statement:

If it weren’t for the MILLIONS of dollars that has been spent on snowmaking over the last several years at all of our area’s ski resorts, we’d have only been skiing a handful of days this season – AT A HANDFUL OF RESORTS! Consider the following NATURAL SNOWFALL SO FAR THIS SEASON:

73.3" at Canaan and Timberline
70" at Snowshoe Mountain
50" at Wisp Resort
31.5" at winterplace Resort
29.6" at Beech Mountain
23.2" at Sugar Mountain
12.4" of snow at Appalachian
9" at Cataloochee and Wolf Ridge
3.4" at Bryce Resort and Massanutten
2" at wintergreen and Ober Gatlinburg

Eight of the ski areas above MIGHT have gotten in one or two days of skiing and snowboarding this season. On top of that, this season has provided so many less than freezing days and nights and if it were not for the vast improvements in snow making and the AMOUNT of snow making machines and towers purchased for our ski areas…we’d have had many additional days when the resorts were closed this season.

The kind of weather that we’ve had this winter would have prompted many more resort closings in years past. It is due to the expansion of snowmaking plants at our area’s ski resorts that has enabled us to be on the snow almost non-stop this season.

Over the years we’ve fielded many emails from our readers complaining about the cost of skiing in the Southeast as compared to out west. Remember that the ability to be ABLE to ride in the Southeast comes with a cost – the cost to MAKE that snow and keep it on the mountain.

The resorts are looking pretty good today…and with the forecast for the week ahead (especially from Winterplace Resort South) we’d suggest hitting your favorite ski resort today and often!

Now admit it – does ANY other ski resort resource provide you guys with THIS kind of insight? Of course not!  Do us a favor and spread the word! Tell your snow loving friends to visit www.SkiSoutheast.com. Thanks!