Happy Hump Day everyone! It’s Wednesday again. I swear the weeks are just flying by now. Unfortunately, it looks like today is going to be a pretty nasty day outside. A weather system is moving across the eastern portion of the country bringing lots and lots of the underdeveloped stuff our way. I’d be lying if I said it was a good day to go ski or ride. I wouldn’t be surprised if a few resorts closed for the day due to the weather as it’s going to be coming down pretty hard at times. As always, you can go to our sister site, High Country Weather, to get a full forecast.

One the bright side, it looks like sometime tomorrow the precipitation will turn to snow at many of the ski areas. Basically, this looks like a repeat of this past weekend’s event where we see heavy rain for a day and then it snows a few inches the following day. Like I said yesterday, I really hope I come in here Friday and get to talk about how awesome all of the resorts look on the web cams with some fresh snow. I saw a trip report from Mo 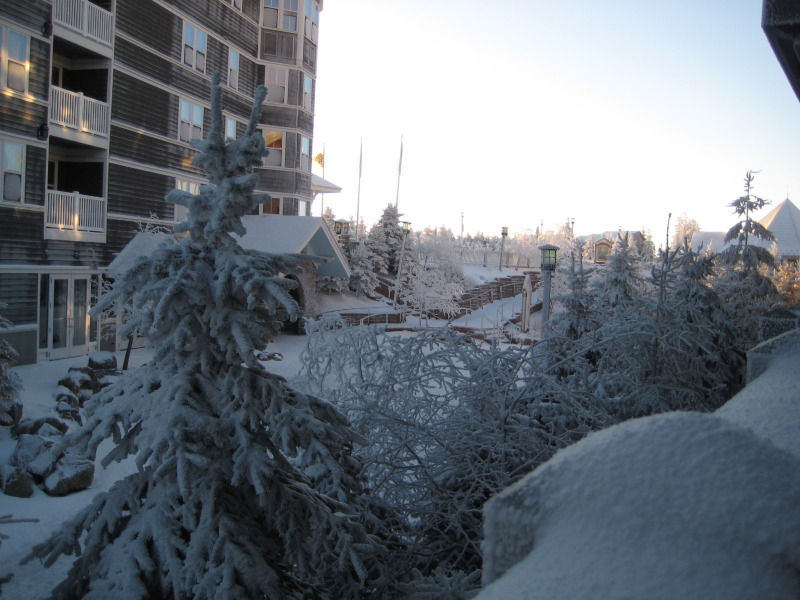 nday at Snowshoe and it looked pretty dang good after it snowed up there all day Sunday. Cross your fingers that it happens again for all of the resorts!

<<<This is what the village at Snowshoe looked like Monday after the underdeveloped stuff changed to snow.  It’s looking like the same will happen again tomorrow!

Talking about snow, I came across an article the other day which was saying that some scientists are linking this season’s heavy snowfall events to global climate change (I say climate change because I don’t like the term global warming, don’t get me started). Having a degree in meteorology myself, I had already heard this at a conference in Seattle back in January. As everyone is already aware, we are in La Nina state right now and have been all winter. Back in October, all the weather forecasters (including myself) were thinking it was going to be a really dry, mild winter for us here in the Southeast. Yeah, that doesn’t seem to have happened at all. December through early March we had a snow event every week it seemed like. Now, while it has been milder, we have seen A LOT of the underdeveloped stuff in recent weeks.

One of the most interesting parts of the article I thought was when they started talking about being in the negative phase of the North Atlantic Oscillation. If you go back to before the season started, Brad Panovich talked about this in his winter forecast. He mentioned how it would have a pretty big impact on our weather and allow for some cold and snow. While it turned out to be a lot of cold and snow, he was the only forecaster that I can think of off the top of my head who mentioned this fact in his winter outlook. It just goes to show you he really is the best person to look to for weather in the Southeast!

You can read the entire article here.

That’s all I have for this morning.  Here’s a look across the region…

Appalachian Ski Mountain – 32°- Open today on 100% of the mountain with a groomed and wet granular surface. I was out there last night and it is very impressive how much snow they still have. You could definitely tell they had been making snow over the past couple of nights. They are in great shape right now. Ice skating is also open today.

Beech Mountain Resort – 32°- They are open today on 13 of 15 trails with a groomed surface. Don’t forget that their discounted March rates are in effect. You can get a full day lift ticket for just $20. They close for the season on Sunday and they will be having festivities to celebrate another great season.

Sugar Mountain – 35.7°- Open today on 100% of the mountain with a wet and frozen granular surface. They also have March madness rates in effect until the end of the season. Lift tickets are 25% off. Their Spyder Sample Sale is still going on as well. Tubing is closed today but skating is open.

Snowshoe Mountain – 24°- They are open on 59 of 60 trails today with a groomed and frozen granular surface. They did make snow last night!  Here’s what they have to say – " It’s SNOWING! Mother Nature has once again come through and what was predicted as rain in some forecasts is (at least for now) falling as snow on the mountaintop. We’re experiencing some mixed precipitation at the base of the mountain, but from about 3,500 feet up there’s a coating of white across the ground and in the trees. We may see that snow turn to rain as the temperatures rise just a bit today, but we may also stay just cold enough to keep the snow coming. Regardless, we shouldn’t see heavy precipitation either way. Tomorrow, the Precision Weather forecast that we’ve been talking about all season is calling for colder air to move in and more SNOW! That’s right; we could see as much as 3" of accumulation through Saturday. And don’t look now, but a somewhat MAJOR snow event may be forming for Monday. While that’s still a ways out, Precision Weather is calling for 4-8" on the mountain. So don’t put those skis or board away just yet, winter is NOT over!

We were able to make snow in limited areas overnight and once again our expert grooming team was out grooming all 59 open slopes. Sunday’s new snowfall and cold overnight temperatures the last few days have helped us significantly improve conditions across the mountain, and they’ll only continue to improve with snowfall over the next several days. We should start off with a firm corduroy surface this morning, which may become a little sandy as skier traffic increases throughout the day. If we do see some afternoon rain we may see some spring-like conditions before the day is over. But it’s going to be a great day on snow and Snowshoe continues to offer the region’s most open terrain. We anticipate remaining nearly 100% open through the weekend, with almost 244 skiable acres available for your enjoyment. Sunday will mark the end of the season for the Silver Creek area, but we don’t anticipate losing any additional terrain at this time, and with that Monday weather event in the works, we could have an epic late-season powder day on tap!

Don’t forget, this week is the last week for night skiing, as Silver Creek will be closing for the season on Sunday, March 13th. The tubing hill will close for the season following Saturday’s session on the 12th. But value season pricing is just around the corner, and with this new snow we’ll be sure to be providing great conditions through the end of the season, scheduled for March 27th. And we have more great events coming up, including WV SKI FREE day on Sunday, March 13th and our Last Hurrah party and pond skimming event on Saturday, March 26th. Visit snowshoemtn.com for a complete list of events and great deals for the remaining 3 weeks of the season, including 50% off lift tickets when packages with lodging during a stay between March 18th and 27th. That means you’ll enjoy the region’s most open terrain for just $26 a day!

Finally, we can’t forget to mention that 2011.2012 season passes are now on sale. As the season winds down it’s time to think ahead. If you purchase your 2011.2012 season pass by April 30th you’ll save up to 28%. Plus, purchase before the end of THIS season, and come up and enjoy your last fix of fresh snow, and you’ll SKI FREE! That’s right, purchase next year’s season pass now, and SKI FREE for the remainder of this season! There’s still great snow to enjoy and plenty of time to do so. Visit snowshoemtn.com or call 877-441-4386 to purchase your passport to Snow Country!!

Wisp Resort – 34°- Open on 27 of 32 trails today with a groomed surface. I received some pictures from Wisp taken on Monday and man it looked good up there. They still have a ton of snow and will continue to make some as the weather permits. Discounted ticket prices are in effect today as it is Locals Day, where everyone is a local and receives an extended day lift ticket for just $21. There will be tubing and skiing tonight. Ice skating is also open tonight.

Massanutten – 44°- Open today on 100% of the mountain with a groomed surface. They will be skiing and riding today from 11am until 7pm. Both terrain parks are also still open with a number of features set up. Just a reminder that this Sunday is Heroes on the Hill Day, where military personnel receive a free lift ticket.

Wintergreen – 27° – Open today on 24 of 26 trails with a groomed surface. There will not be night skiing again until Friday but tubing is open today. Lift tickets are discounted by 20% through Thursday, and then 30% starting Friday. Wintergreen will be open until March 26th, weather permitting.

Canaan Resort – 28°- They are closed until Friday when they will reopen for their final weekend of skiing and riding.

Timberline – 28°- Open today on 34 of 39 trails with a groomed surface. There will be no night skiing tonight, but they backcountry is still open with a 3-9” base. Don’t dig in with your edges too hard on that!

Winterplace – 33°- Open today on 100% of the mountain with a groomed surface. Those 53 automatic snowguns they bought this past summer were such a good investment. March madness rates are in effect and this Friday, get a free lift ticket with the purchase of rental equipment and a valid West Virginia or Virginia ID.

Bryce Resort – 37°- Open today on 6 of 8 trails with a groomed surface and they will only be having a day session. Bryce will close for the season this coming Sunday.

Previous Post
A New King of the Mountain? What a GREAT time we had at the Snowshoe Summit!
Next Post
A Bluebird Pow Day at Wisp on Monday!