A GREAT MLK Weekend and More to Come 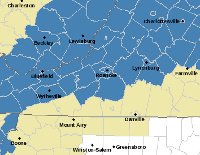 What a great MLK weekend for the Southeast and Mid-Atlantic resorts.  The skiing and riding conditions were near perfect as was the weather.  The planets aligned and the crowds up from down the mountain got a real treat.  Hopefully we converted some of the first timers and we’ll be seeing them again (don’t get too spoiled).

The big story is the next weather event that is coming our way.  ALL of our member resorts are under a Winter Storm Watch.  Depending on where you are, the Watch starts tonight and goes through Wednesday morning.  For most of us, go time is early Tuesday morning through late Tuesday night.  The Warning is calling for 5-6” possible, with 2-4” more likely here in North Carolina.  What a season this is turning out to be!

Back with my first post on September 7th, I mentioned the winter outlook according to the Farmer’s Almanac.  Here’s what it said, “Winter will be colder and drier than normal, with the coldest periods in early and late December, early January, and early February. Snowfall will be near normal in the north and above normal in the south, with the snowiest periods in early November and in mid- and late February.”

The colder part was spot on and allowed the slopes to open early, stay open for the most part, and provide us with great early season conditions.  More than a couple resorts opened the earliest they have in decades and with records amount of coverage.  The temperature prediction way back in September for January was pretty accurate too, and I think we all remember the Artic Vortex of a couple weeks ago.

The early snowfall in November helped to kick start the season with Snowshoe, Beech, and Sugar seeing their first snow just before Halloween.  I bring all of this up because here we are getting close to late January (it’s the 20th, when does late January begin) and we’re on the cusp of what could be the biggest storm of the season so far.  Mike mentioned in his Saturday post that we are half way through the season, and if the Almanac is correct that mid-late February will be one of the snowiest periods of the season – the best is yet to come. 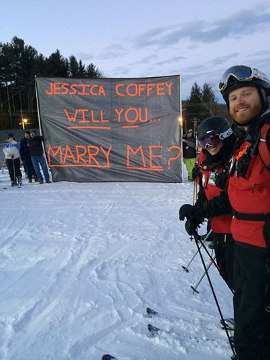 I just went through some of the trip reports of the weekend, and it looks like you guys (and skipink), had a great time.  If you haven’t already, you should check out the reports.

There was more going on at the slopes than just skiing – it seems that something might have gotten into the water.  Cataloochee had a marriage proposal on Saturday and Beech had a wedding on Friday.

I’m not as verbose as Mike is so I’m about done. 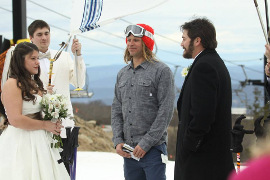 Before I go, I would like to thank Mike for taking the helm for a couple of days while I was visiting the in-laws in a place and time that technology forgot.  If I hiked out to the far end of the farm and stood atop a rock, I could get just enough of a phone signal for text messages, but that is it.  But sometimes it is good to unplug – good for the soul and all that.

It is going to be a great day today, maybe the best of the holiday weekend, and this week is shaping up to be an exciting one.  I’m going to try to take advantage of the weather and hit a couple places here in North Carolina this week.  Keep an eye on the weather and the cams, we could be in for a wonderful ride!