A Brief Bump in the Road 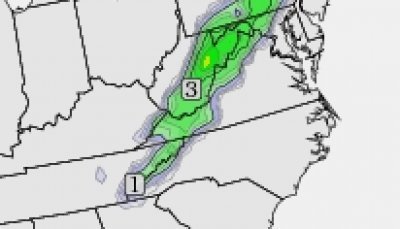 After such a great end to last week in terms of weather and snowmaking at the ski resorts, this underdeveloped snow and dreary weather in general has been kind of hard to swallow for me.  I am so ready for sustained cold weather and snow.  This is the third time I’ve gotten to ride this season and then seen all of that snow disappear just a few days later!  As the title of this post suggests, these few days are just a brief bump in the road as it appears that much colder weather is back in the forecast for the second half of the week!  I’ll get to that in just a second.

Going over the resort reports for the morning, it appears that Sugar and Beech are closed for the day.  Both hope to re-open as soon as possible (probably Thursday) and will make snow whenever cold temperatures return.  Beech actually closed yesterday early on as conditions deteriorated pretty quickly.

That leaves Cataloochee as the only ski resort open in the Southeast region right now.  They will be skiing and riding today on 3 trails from 9-4:30pm.  Looking at the webcam, coverage looks pretty decent this morning considering the weather over the past 24-36 hours.

Now, enough with all of the downer news.  As I mentioned, much colder weather is on the way beginning tomorrow night.  Once colder air arrives, this wet stuff should change over to snow Wednesday night and just about everyone should see at least a little bit of natural snowfall.  Even 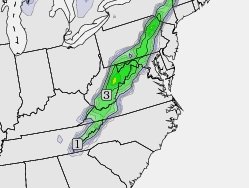 the Virginia resorts should see at least a little bit of natural snow!  The second half of the week is the polar opposite of the first half.  We’ll see bluebird skies but temperatures will be CHILLY.  Several resorts will be able to make snow around the clock.

<<<< The snowfall forecast from one of the models showing that EVERY ski resort in the region should see a little help from Mother Nature!

I am very interested/excited to see what resorts open for the upcoming weekend.  As of right now, Snowshoe and Timberline are the only other resorts besides Cat, Sugar, and Beech who have announced that they plan on opening this weekend.  Canaan was scheduled to but they have pushed back their opening date til next weekend, December 17th.  I suspect we will see a couple others open up shop this weekend but I won’t speculate on those just yet.

Make sure to keep checking back in here every morning and we will have all the updated news and info about resort openings and what not. The next few days should be pretty interesting across the region.