The storm has come and gone and left us with some snow in its wake.  I believe all of the North Carolina ski resort counties have closed school for today, as did Ober in Tennessee, as well as some resort towns up in West Virginia.  The cold front that accompanied the storm is hanging around and keeping temps in the danger cold range.

First to the snow fall.  Here in North Carolina, both Appalachian Ski Mountain and Beech Mountain Resort are reporting receiving 3” of natural snow in the past 24 hours, Cataloochee Ski Area got about an inch, and Sugar Mountain is reporting 5”.  I know that sometimes we look at Sugar’s reports with a cocked eye, but they might not be too far off this morning.  Sugar was the first hill to start getting snow yesterday morning about this time. 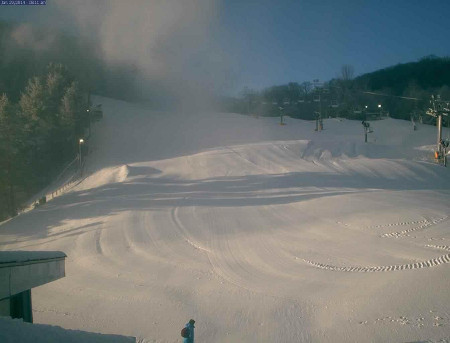 This was a rather unique storm, so we don’t find the typical snow patterns that we have become used to.  While we got a bit down here in North Carolina, Snowshoe in West Virginia only received 0.5” from the storm.  Winterplace received about an inch of snow and Wintergreen in Virginia received 2” of snow from Mother Nature. 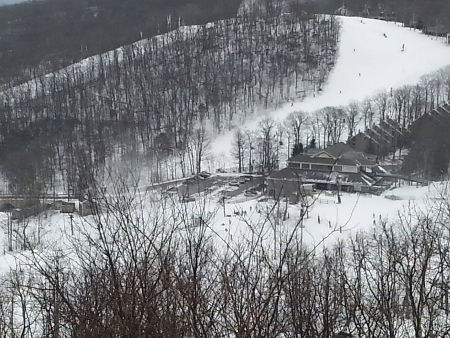 Given how this storm was a little odd in its trajectory and the south of the region received more snow, it should be no surprise that Ober Gatlingburg in Tennessee turns out to be the big winner.  Ober received about 6 inches of natural snow. 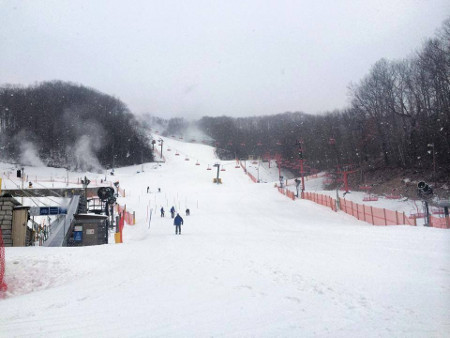 Much of the area is still under Wind Chill Alerts/Warnings and/or Winter Weather Advisories this morning.  It is going to be cold wherever you go, with temperatures hitting the teens and low 20’s in West Virginia and Virginia (but only supposed to get to 5 degrees today at Snowshoe), while down here in North Carolina Cataloochee might hit 30 and Beech 22 degrees.

A Special Weather Statement has been issued for a large portion of our member resorts.

A COLD ARCTIC AIR MASS WILL REMAIN OVER THE REGION THROUGH THURSDAY… THREATENING HEALTH AND PROPERTY. HIGH TEMPERATURES TODAY WILL RUN AROUND 18 DEGREES OR SO BELOW MID WINTER NORMALS… AND ARE NOT EXPECTED TO CLIMB ABOVE FREEZING IN MOST MOUNTAIN AREAS. GUSTY WINDS WILL LOWER WIND CHILL VALUES TO BELOW ZERO IN PORTIONS OF THE NORTH CAROLINA MOUNTAINS TODAY. THE COLD TEMPERATURES WILL LIMIT THE MELTING OF ICE ON ROADS IN THE MOUNTAINS. LOW TEMPERATURES TONIGHT ARE EXPECTED TO BE AROUND 17 DEGREES BELOW MID WINTER NORMALS… BUT WITH LESS WIND… WIND CHILL VALUES WILL NOT BE AS HAZARDOUS. HIGH TEMPERATURES ON THURSDAY ARE EXPECTED TO RUN AROUND 12 DEGREES BELOW NORMAL.

IF YOU GO OUTSIDE… WEAR SEVERAL LAYERS OF LOOSE FITTING… LIGHTWEIGHT… WARM CLOTHING RATHER THAN ONE LAYER OF HEAVY CLOTHING. MITTENS ARE WARMER THAN GLOVES. WEAR A HAT AND COVER YOUR MOUTH WITH A SCARF.

IF DRIVING… KEEP YOUR GAS TANK NEAR FULL TO AVOID ICE IN THE TANK AND FUEL LINES. CHECK YOU ANTIFREEZE AND WINDSHIELD WASHER FLUID LEVELS. BE SURE TO CARRY A FULLY CHARGED CELL PHONE. IN YOUR HOME… CONSIDER ALLOWING INDOOR PLUMBING FIXTURES TO DRIP TO ALLOW WATER TO TRICKLE THROUGH PIPES AND INHIBIT FREEZING. USE CAUTION WITH SPACE HEATERS IN ORDER TO AVOID FIRE OR INJURY. IF EMERGENCY GENERATORS WILL BE USED… THEY MUST BE SITUATED OUTDOORS IN WELL VENTILATED AREAS TO PREVENT CARBON MONOXIDE POISONING.

ALSO… REMEMBER TO CHECK ON FAMILY… FRIENDS… ADN ELDERLY NEIGHBORS WHO MIGHT BE SUSCEPTIBLE TO THE COLD. DO NOT FORGET ABOUT YOUR PETS AND LIVESTOCK. MAKE SURE THEY HAVE A SOURCE OF WATER THAT WILL NOT FREEZE AND A WARM PLACE TO TAKE SHELTER FROM THE WIND AND COLD.

We’ve seen these before this season and you are wise to take them to heart and put on your thicker layers this morning.

I’m excited for the snow day and am anxious to get out in it with my Son.  You guys take care.