Something to Be Thankful For 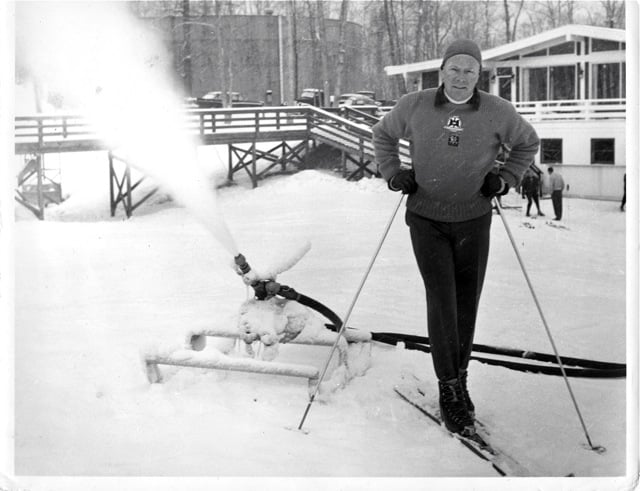 Everything evolves, and this Thanksgiving ski weekend at a handful of the region’s ski areas is a great example of how far skiing in the South has come.

Today, the target date for many Southern ski areas to open is Thanksgiving, and has been for some years. But not so long ago, even the biggest ski areas almost always declared December 15 as their target opening date, and if they were open and  operating by Christmas it was a home-run. The snow guns cranked up, the snow piled up, and then over time, someone dropped the rope and skiing was underway.

That’s changed, for the better. Granted, it looks like rain will be rolling in for some of this coming week, and who knows, if winter really doesn’t arrive until December 15th, ultimately, skiing in the Southeast could have to wait on Old Man Winter.

Despite all the controversy over global warming, it’s not the weather that’s the story here—it’s the ski industry’s response to it. Increasingly of late, the exploding fire power of Southeastern snowmaking systems has made it “the norm” for the most aggressive ski areas to launch the season whether it’s likely to last or not.

Take Sugar Mountain for instance. Gunther Jochl has led that trend. Last ski season I sat down with Jochl and he recalled the post-bankruptcy “bad old days” of the 1980s.

“It used  to be unheard to start skiing before the 15th of December,” he told me. “You just were not even thinking about it. And that applied from way farther north than Virginia all the way down here.” Jochl had been at Sugar since the late-70s, but something suddenly dawned on him. “I said to myself, it’s gonna get cold. What else do we have to do? Let’s make snow! I think we opened the 15th of November. Everybody thought we were nuts.” By the time many other slope operators started scratching their heads, “we had Big Birch open, with fantastic  skiing, and made some money.  We also got some great publicity. Nobody had ever done it.”

Jochl noticed something else. Formerly depressed local ski folks were smiling and getting excited. “Open early” became Jochl’s playbook, and it has been ever since. Good snow years came along, but, “I think our aggressive approach to doing things helped.” The wire service news bureaus—remember those dinosaurs of the pre-Internet age?—sent out photos to newspapers and suddenly skiing was on a lot of front pages in November. I ought to know—I took some of those pictures.

Today, it’s a different but similar story. Our own Mike Doble showed up at Appalachian Ski Mountain last week and SkiSoutheast TV broadcasted live from a snow-covered ski area. And TV weather broadcasts all over the South have been running footage from ski resort webcams. There’s no longer any need to send the mobile TV van up the mountain!

Jochl helped usher in today’s normal by using aggressive snowmaking to open early. Then he targeted great slope grooming, but that’s a different story. Between snowmaking and grooming, Jochl “doubled our skiing numbers. I like to ski and I like to ski nice conditions—and people don’t want anything different than I want.”

And that surely goes for opening early. Who doesn’t want that? Next week may bring rain—but a drier than expected Thanksgiving has brought days of holiday skiing and boarding to the North Carolina High Country—at all three ski areas of Appalachian, Beech and Sugar (and Cataloochee farther South). The open resorts have excited locals and attracted early season skiers (and their dollars), many of whom are heading home with a Christmas tree on top of the car.

The result? Check out Mike’s TV spot from Appalachian Ski Mountain to hear Brad Moretz talk about how his resort debuted with two-thirds of the slopes open after 36 hours of snowmaking! Jochl sees Appalachian at the crest of that curve. “That’s one thing Appalachian does,” Jochl says. “Let’s be honest. They hit the button, every snow gun comes on, and they cover the whole mountain.” Kim Jochl leaned into the conversation. “They pulverize it,” she said, “and that’s awesome.”

Jochl’s attitude is priceless. For such a conservative business manager, the man knows you gotta get out there if you’re going to make things happen. “We have smaller windows for snowmaking down here,” he says. “If I have a week to make snow and I can really cover this mountain with a good base, but we use all our water, fine—I used it all. Why should we make snow for one week and still have water left? Now it’s up there on the mountain. If it melts we’ll use the water again.”

All of the above came to mind as I read a press release from Mount Cranmore, New Hampshire last week, announcing that the North Conway resort in the Mount Washington Valley would be open three days over the Thanksgiving weekend thanks to their great snowmaking system.

Imagine, those slopes are 1,002 miles north of where I live in Banner Elk, just a sixteen hour and fourteen minute drive. How thankful we should be that there are passionate skiers, who are also ski area operators, providing snow sports a lot closer than that! Thanksgiving skiing is only a few hours from people all over the South, right now, today. And from me, I am thankful to say, it’s just 16 minutes away.