6″ of SNOW Has Fallen, With More Coming Down! See Where! 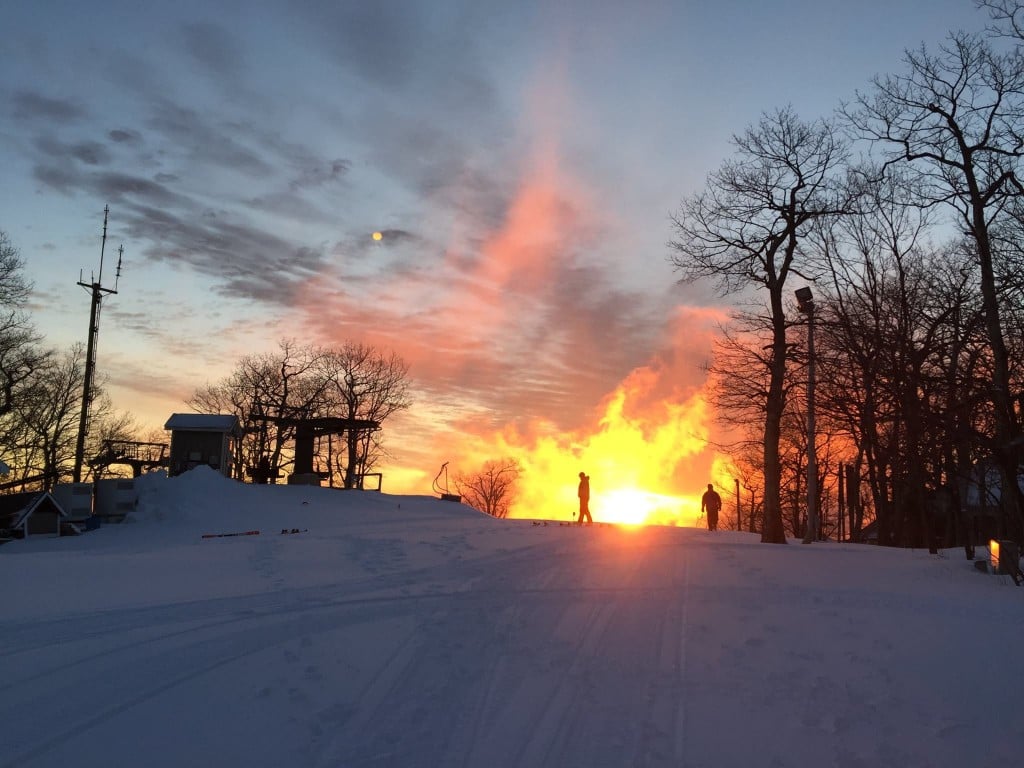 Even with the SNOW this morning, I HAD to share the amazing photo above that was snapped on Sunday morning at Wintergreen Resort. Pretty sweet!

It’s been a “numbers game” lately. On Sunday morning the numbers we were sharing were the low temps that were in the -4° to 2° range at many locations. Today, President’s Day Monday, it is twenty degrees “warmer” in many locations but still in the mid teens to low 20s (with a few exceptions).

It is definitely colder into Virginia and West Virginia this morning as it appears that the milder temps that are forecast to bring some freezing rain have already filtered into the North Carolina mountains where temperatures are already climbing from lows last night of around 9° to low 30s already.

Temps are still in the low 20s and there are even some teens in VA and WV. It was snowing HARD this morning as late as 9:15am or so as several television stations were featuring our live webcams. Boone, Blowing Rock and West Jefferson were showing near blizzard-like, heavy snow.

That has now moved out although according to the NWS there is still a chance for more precip. With temps already at 30° here at my house…I’m thinking that we might be done with snow around Beech, Sugar and Appalachian. Again, the NWS seems to be saying that we could see another 1-3″ of snow into Tuesday and Wednesday. We’ll see. 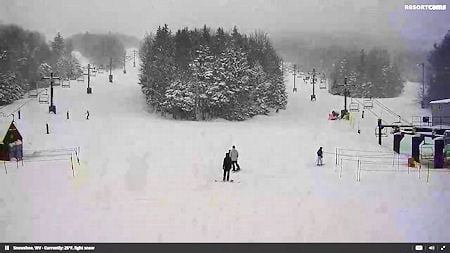 Heavy snow was falling at Silvercreek at 9am!

We ARE seeing HEAVY SNOW into Virginia and West Virginia. They are already reporting 5″ of snow at many locations up there with another 2-4″ in the forecast. As hard as it is snowing right now, I don’t doubt it!

By the way – TODAY makes for the 46th Straight Day with Snow on the Ground!

As mentioned – the temps have already moderated like crazy this morning in the North Carolina mountains with morning temps in the 20s and low 30s already and yet the ski areas in Virginia and West Virginia are still in the mid teens. That COULD be an indicator that we are indeed in for some ice later. It was 9° late last night as I was headed to bed and now it is 34°.

When is the last time you saw a snow report where Appalachian received more natural snow than Beech and Sugar Mountain? That happened over the last 24 hours as Beech Mountain is reporting 3″ to App’s 4″. Don’t feel bad for Beech though because minus two days since February 9th, Beech has seen snow every day and 23.9″ of the white stuff.

Sugar Mountain has seen 21″ during that same stretch.

As a comparison, the snow-rich areas of Davis, WV and Tucker County – home to Canaan Valley and Timberline ski resorts has seen 29.3″ of snow.

While 3-4″ fell across much of the High Country – the top snow total in Watauga County was in Rutherford with 7″ of snow officially reported by CoCoRaHs.

The hardest snowfall is taking place at the Silvercreek side of Snowshoe Mountain and at Canaan Valley Resort.

While MORE snow will accumulate today…here are the 8am snowtotals:

Two Out of Three Aint Bad…

Meat Loaf’s 1977 song title pretty much applies well in describing the fact that we can now say that two of the three most important periods within each season have provided awesome weather.  Christmas-New Year was a wash…but MLK weekend and now President’s Day weekend have been snowy and about as good as it gets.

The filled-to-the-bursting-point parking lot at Sugar Mountain will attest to the fact that it has been an awesome “skier-visit” weekend again this weekend. Of course the “negative side to that” is the fact that we’ve received numerous emails complaining about over-crowded slopes. That goes with the territory.  Like we always say – get out early and hit the slopes when they are uncrowded.

I will say that while viewing all of the ski cams this morning, this snow has the slopes kind of WIDE OPEN. I was watching the skier traffic at Canaan and Silvercreek and they are sparsely trafficked.

Here are a few notables…

Canaan Valley Resort – 14° – 2.4″ of new snow, 29″ since Feb 9th and 83.4″ on the season. Canaan is open with 46 of 47 trails open for day skiing only today. They also have closed their tubing hill today and it will stay closed until Friday for snowmaking.

Snowshoe Mountain Resort – 23° – 5″ of snow, 24″ in the last 7 days and 94″ on the season. Snowshoe has 55 trails open for powder skiing today! Our buddy, Shawn Cassell posted, “Looks like we’ve been hit with the first half of the storm overnight with a yield of 5 inches! The snow is light and fluffy and it’s going to make for absolutely perfect conditions today. Snow will continue through the day today as well. Check out the newly designed Evolution Park in the basin! Mountaineer Park will open as a ski trail without features. Widowmaker will be delayed until 11AM for ski team practice.”

Wintergreen Resort – 19° – 6″ of snow and SNOWING HARD this morning. They are 100% OPEN and reporting – Roads on and around the resort are in pretty good shape. 4WD/AWD or FWD with chains suggested for travel to the resort at this time. No issues, as of now, approaching the gatehouse. Please drive with caution!

Appalachian Ski Mountain – 25° this morning after a 9° low overnight. They picked up 4″ of snow! 100% OPEN. They are giving away a FREE FAMILY PORTRAIT TODAY from 11am until 3pm. They’re also serving up a “Pig Pickin’ and Fixins” cooked and served slopeside from 11am until 3pm.

Beech Mountain Resort – 24° – 3″ of new snow. They are 100% OPEN. They are offering WEEKDAY PRICING on this President’s Day Monday.

Previous Post
Happy Valentine’s Day. More Snow in the Forecast!
Next Post
SO YOU THINK YOU ARE A WEATHERMAN