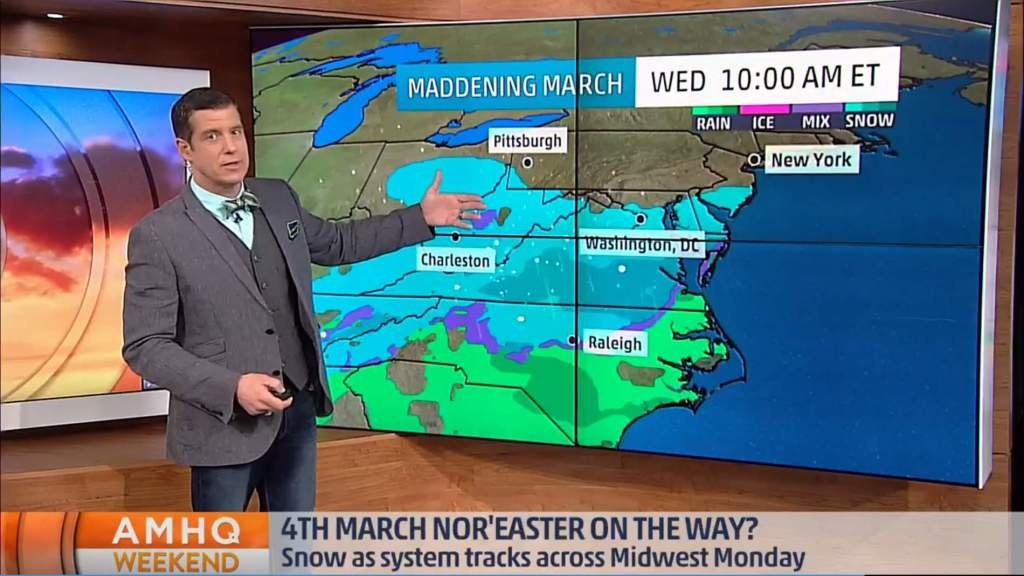 How crazy? How about 14° up at Wisp Resort this morning; 18° at Snowshoe and yet 41° here at Seven Devils this morning. Spring hit HARD at our offices on Friday as temperatures soared to 60°. Flowers are starting to pop out of the ground after 17″ or so of snow fell here (and 50+ ” in West Virginia) as the 3rd Nor’easter in two weeks bombed portions of West Virginia and Maryland. Of course we saw some residual effects of that system here in the North Carolina mountains as well.

This morning’s FirsTrax is for all of you who emailed me this past week asking us to “PLEASE keep the updates coming”. Some of our readers start getting the SkiSoutheast Joneses even before we quit updating. On that subject we don’t stop until the last skier or snowboarder leaves the slopes for the season. We’re here for another couple of weeks for certain.

Back to our “regularly scheduled” news this morning…

It is MILD to say the least here in NC this morning as Spring officially starts on Tuesday the 20th. Meteorologist Brad Panovich was on air via WNCN News last night telling everyone that this warm stretch won’t last as a 4th Nor-easter in 3 weeks is possible that will bring in more cold and snow to the region AND that the cold weather looks to be locked in through at least the end of the month. So Easter Sunday skiing and snowboarding will be happening.

The 4th Nor’easter this month looks to be bringing in MORE snow for Snowshoe, Wisp and the High Country of Western North Carolina. Stay tuned.

Those who have followed SkiSoutheast for years might remember that March 17th around here is St. Katie’s Day in honor of my niece who was born back in 1984 with severe hydrocephalus which has severely affected her and caused numerous operations throughout her life. So here’s to Katie. Happy birthday sweet girl. Also thinking about her dad (my younger brother) who passed away five years ago.

So yea, I’m feeling a bit melancholy this morning. Not sure if it’s the Spring Fever melting all the snow and the fact that Winter is still in “full tilt boogie mode” in WV.

Changing things up a ton…

This freakish ski lift debacle has been all over the news in every form of media for the last 24 hours so I doubt I’m sharing this with anyone who has not seen it – however just in case.

At least eight people were injured after a chair lift at a Georgia ski resort (in Russia) malfunctioned,

A lot of news outlets prefaced the video by saying, “Don’t watch this video if you ever plan to ski again…” but after reading that nobody died and that eight people were “only injured” I’ll admit that my reaction was like – “WHAT!” and I did laugh for a second before realizing the severity of the situation and how terrible that had to have been for those on the lift.

It was STILL odd, crazy, scary, bizarre and a little funny all at the same time. Those crazy Russians.

If I were headed to Sugar today, I’d have NO reservations about getting on the lift though – however I DO know some friends who would probably NOT partake of the slopes today after seeing that video.

As videos show, the lift began hurtling passengers back toward the bottom of the mountain at high speed, to the audible horror of bystanders. It’s hard to pick out the most alarming aspect of the videos.

…ANOTHER GEAR CHANGE…AND SOME NOTABLES…

Was this past week an amazing week to follow Kenny Griffin’s FirsTrax news!?!?

With more than 50+ inches of snowfall to report on and hundreds of shared photos from around the region, Kenny kind of missed numerous, great videos that were shared these last few days. So I’ve included them at the bottom of this update.

I looked at David Lesher’s Canaan Valley weather data and 47.59″ of snow has fallen at Davis, WV (home to both Canaan Valley Resort and Timberline Resort) since March 2nd. This late winter surge of natural snowfall has pushed the season total for snow up there to 142.8″ which will make the overall winter look a lot closer to the average of 180″ that the area receives. Four or five years from now we’ll all look back at the 2017-2018 season as a normal or really good one…and while it’s been better for some…it has not been a normal season by any stretch.

Snowshoe Mountain is showing 18° this morning and it is 41° here at my house near Seven Devils. So we might as well get this bit of crazy, over-the-top snow news shared. SNOWSHOE MOUNTAIN IS FOUND GUILTY OF ROBBING/HOGGING ALL THE SNOW!!!!

Ha! All kidding aside, Snowshoe Mountain is 100% open with ALL 60 TRAILS, and if you’re lucky enough to be up there right now…well you’re just blessed!

They have POWDER and PACKED POWDER conditions and LOTS OF IT as 52″ of snow has fallen at the Pocahontas County resort over the LAST 7 DAYS! That puts Snowshoe at 159″ on the season – which catapults them ahead of Canaan Valley which has held the lead in snowfall continuously for the past three full seasons. Snowshoe’s 159″ is more snow than Appalachian Ski Mountain, Beech and Sugar Mountain…combined! That is NUTS!

Here’s a shot from Snowshoe’s Groomers pushing the snow around:

It’s great seeing Timberline Resort getting some LOVE from Mother Nature. They have 28 trails open today with Packed Powder and Powder conditions. The snow and the LIVE CAM looks awesome there this morning although for the most part the slopes are bare of PEOPLE! Gracious that snow looks awesome!

Here are two images captured from 9:20am: 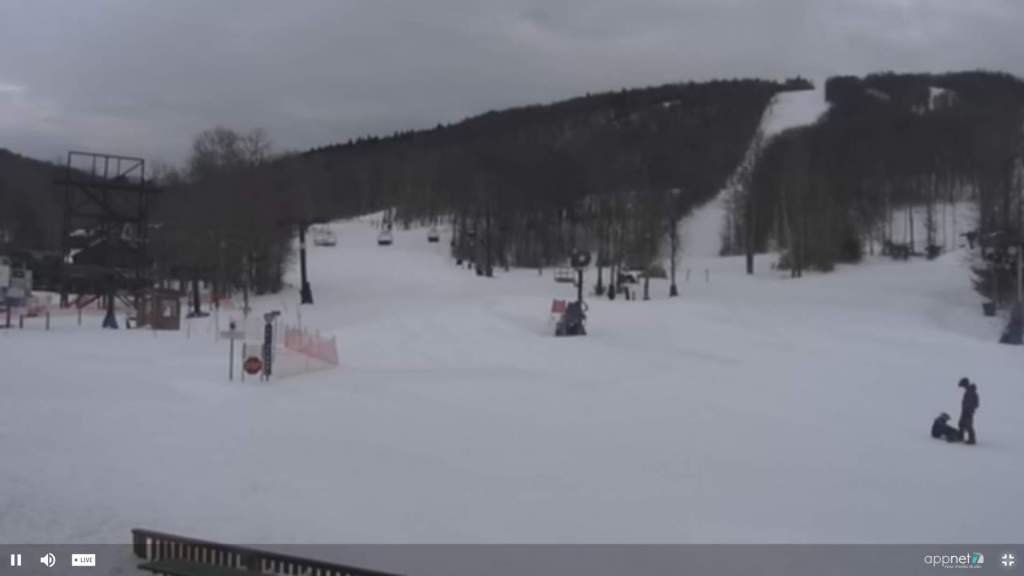 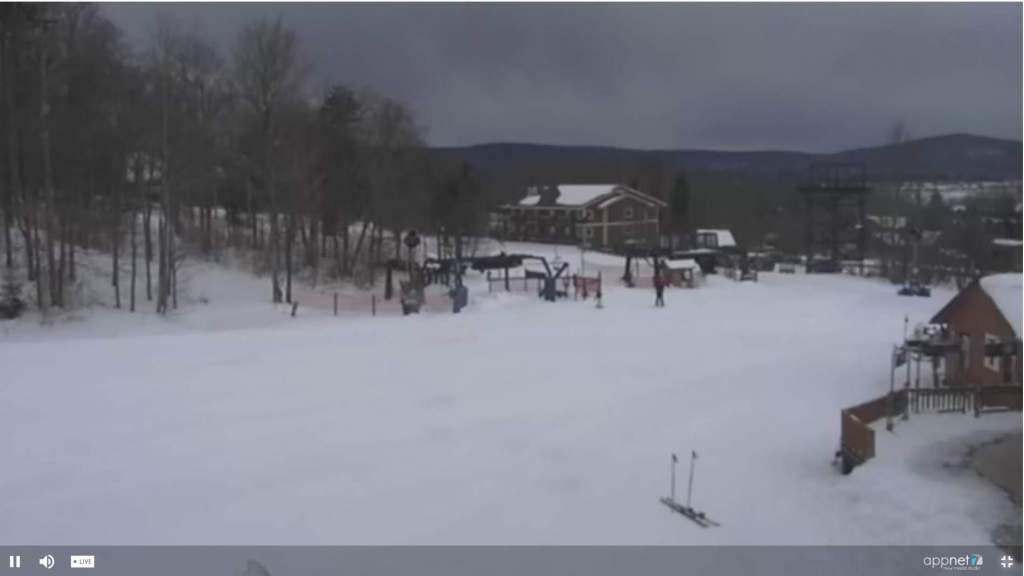 Compare that to here in the High Country where Sugar reported 17″ of snow from the three day storm (and they got that much) and it’s now all but GONE. No kidding, this snow was the craziest disappearing act I’ve seen in years. My Wednesday morning drive into work was through 7″ of deep snow out of my neighborhood and through a foot of snow up towards Banner Elk where I grabbed breakfast and then on Friday morning there are only small pockets of snow here and there.

I’m looking up at Grandfather Mountain from my back window this morning and the mountain is bare. Crazy.

Speaking of Sugar Mountain – they ramped up another slope and now have 11 trails open for today and tonight and conditions look nice.

Appalachian Ski Mountain is looking like mid-season form with 9 slopes open and a base of up to 75″ of snow.

Beech Mountain Resort – I know they closed at the end of February, but you have to wonder where their thoughts are about all this weather as 19″ of SNOW has fallen SINCE they closed. Our own, Kenny Griffin has evidently taken the “if a tree falls in the forest and nobody is around, does it make a sound” approach as he did not update Beech’s snow totals. I pulled the concerted CoCoRaHs reports since February when Beech closed and updated their season snowtotals and while Beech missed out on playing on the 19″ of snow this month, the mountain HAS seen 69″ on the season.

Bryce Resort is still going even though they are slow to post any real updates on their website. That has not stopped our “new Virginia Insider” Bill Nabers from updating us. (Thanks Bill.) Here’s Bill’s latest share:

My knowledge of next week:

With reduced hours at Bryce I have worked a little less on patrol. Went to W’Green Wed. They should have a great closing weekend. I recommend early fun in the Highlands.

I went over to Massanutten and skied today with some friends. (I think it was a Bryce day.) Major kudos to Kenny (Hess) and crew. Excellent skiing off of three lifts. Spent my time on #6 running both Paradice and Diamond Jim. Not completely covered side to side; but wide enough to get a good line and have some options. Good snow conditions. #5 had Rebel Yell (They call it Showtime these days.) open top to bottom. Good coverage and conditions. #4 Beginner slope (Southern Comfort in my day) was nice and wide and enjoyed by all. With something for everyone it was not crowded when we left. (We hit it hard and often early on and I am still feeling it from that great day on Wed at the Green.) I highly recommend early on #6, if your are a decent skier, before the crowds migrate that way or #5 if you need a warm-up. Considering that the “Nut” was closed; you gotta admire what they have done to bring skiing back this season. Wish I had more days to enjoy those #6 slopes. (And the Highlands at Wintergreen.)

So three good resort choices for the weekend in VA. Then come see us at Bryce during the week. Maybe some of the snow will be fully developed this time. I work three days this week, so I hope to welcome you out to our little playground. Who knows, Bryce may be open till Easter?!

I’ve heard that WV and NC are excellent. So no excuses. You can catch the NCAA highlights later.

Looking at Bryce’s snow totals on the season, it is CRAZY to see that they have reported FOUR INCHES of snow on the season!

Wintergreen Resort upped their trail count to 9 for today. They too look really nice.

Winterplace Resort is playing on 10 trails today after 17″ of snow this past week!

Wisp Resort is back up to 18 trails and their tubing park is open. Things are COLD up there this morning at 14°. Wisp’s LIVE CAM looks awesome.

Ober Gatlinburg’s new LIVE CAM is actually showing them spitting SNOW out onto their tubing hill. Bear in mind it is 55 degrees there this morning. Check that out at: http://www.resortcams.com/webcams/ober-gatlinburg/

Also we have a SECOND LIVE STREAM now that shows their awesome aerial tram coming and going up top. Check that out at: http://www.resortcams.com/webcams/ober-gatlinburg-tram/

It IS smoky up there in the Smoky Mountains right now, but on certain days that LIVE STREAM will be awesome to view!

Here are those promised vids…

Check out an amazing torchlight parade of skiers and riders traversing Massanutten’s ski slopes. Whether you were a viewer or participant, the annual Torchlight Slope Parade looked magnificently luminous!

…and in case you’ve been under a rock somewhere…here’s a great video from Snowshoe from this week’s replication of the Blizzard of 1993 at Snowshoe this week where 52″ of snow fell in the last WEEK!

That’s it for me today…