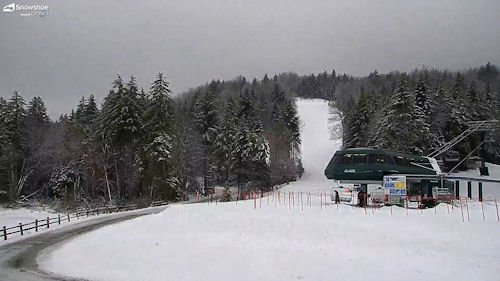 When I first began posting this morning’s report (at 7am), there had not been even a TRACE of snow officially reported at official reporting stations around Beech Mountain. 4″ has fallen thus far at Snowshoe, while the normal (and equally snowy) snow-prone areas around Canaan Valley and Wisp only saw 1-2″ of new snow.

As of 8am it began to snow pretty moderately here at my home as the temps have dropped 2° in the last hour. Sugar and Beech are now reporting a TRACE of new snow. Okay, Sugar is reporting “Natural Powder” but that’s a stretch, unless you’re cool with 1/4th” called “natural powder”.

About one-half of the Southeast’s ski areas are reporting SOME snowfall with the only significant snow falling at Snowshoe in West Virginia. I have to be honest that in looking at Snowshoe’s Boat House Cam I’m not seeing evidence of 4″ of natural snow.

Notice the road and the picnic tables at the Boat House show a trace of snow.

However, Snowshoe IS A NWS official reporting station and I’m guessing 4″ of snow and ice fell and some rain was mixed in – resulting in what we’re seeing on the ground and tables as of this morning. 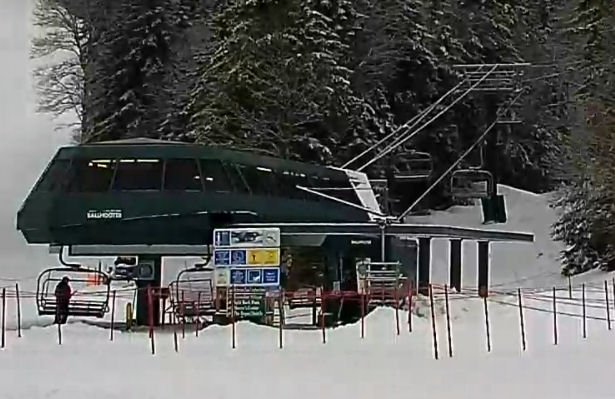 ADDITIONALLY, the Ball Hooter lift WAS NOT OPEN as of 9:15am and workers were seen beating ice off of the chairs.

(See image to the right as Ball Hooter was not running and some skiers and snowboarders were waiting up top and skiing to the other lifts (Grab Hammer, etc)

You can see that official measuring by clicking here for NWS Report for Greenbriar Valley and you’ll have to scroll down to Snowshoe’s numbers. They are:

That’s why we are so appreciative of CoCoRaHs, David Lesher’s Canaan Weather, and NWS official reporting stations. I wish all ski areas participated.
BIGGEST SNOWS CURRENTLY:

Checking CoCoRaHs reports from all over the region – there was a TRACE of snow reported in West Jefferson, NC and some icy precip across a wide path of the mountains…but NOT MUCH in the way of SNOW! 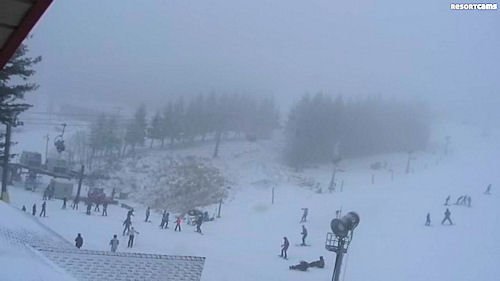 Beech is looking pretty crowded this morning at 9:35am with light snow falling!

Beech Mountain’s CoCoRaHs reporter (if memory serves me correctly that is Beech’s Gil Adams) reported .35″ of precip and I can tell you that SOME of that was ice but MOST of it was moderate to heavy rain late on Friday. I was up at Banner Elk around 7pm Friday and it was raining there as well.

The forecast through the weekend and into Tuesday looks snow with some forecasters predicting 1-3″ of new snow. Others are saying more…

Some forecasters are STILL calling for perhaps an inch of snow and sleet through this morning but the temperature here at my home is 34° right now and even though Sugar and Beech are hovering right now at 28° I don’t see it happening. We’ll see though.

I checked the weather forecast for the snowiest mountain this morning (Snowshoe) and EVEN THEY are not expected to see much in the way of additional snowfall today and perhaps another 1″ by tonight.

Beech and Sugar Mountain ARE NOW forecasted to see perhaps one-inch of additional snowfall and that has changed within the last couple of hours.

Additionally SNOW IS IN THE FORECAST with perhaps 1-3″ of new snow expected at Beech on Sunday afternoon and into Monday. In fact it LOOKS snowier from today through Tuesday although not much is expected to fall throughout the whole period. This COULD be one of those situations where it snows for four days but the sun comes in and out and we have 1-3″ of actual snowfall.

…and along with this snowy period – we should see PLENTY OF SNOW-MAKING at all resorts as temps are expected to be in teens and 20s with some single digits expected around Snowshoe by Tuesday night. Monday night might be the coldest temps around Beech and Sugar with a low of 13°.

So expect the snowguns to crank.

Brad Panovich was hinting at perhaps a BIG SNOW event coming in late next week and/or into Super Bowl Weekend so MAYBE we’ll get some snowier patterns as we get into February.  Someone in our office was joking that with a pre-season snow forecast of 167% more snow than normal – February and March will be UNBELIEVABLE!

Brad even predicted that February could be a great month in terms of snow…so let’s keep our fingers crossed and THINK SNOW! (Right NOW we’re not seeing evidence of a BIG SNOW event next weekend although there IS SOME SNOW in that long-range forecast. We’ll take any right now, right?!?!

It DOES look like a very cold 7-10 days ahead and that will make for some awesome conditions and wonderful surface conditions on which to ski or ride. So if you haven’t planned a getaway to your favorite ski hill thus far this season – THIS WOULD BE THE TIME TO DO SO.

We’re still INVITING YOU (if you’re reading this, YOU are invited) TO JOIN US and ski or ride at Snowshoe Mountain on February 28th-March 1st for our SkiSoutheast Summit. All you have to do is CLICK HERE and simply call Snowshoe and BOOK your reservations. MENTION THE PROMO CODE of “SKISOUTHEAST” and you’ll get 20% OFF any lodging on the mountain AND a TWO DAY LIFT PASS for Saturday & Sunday lift tickets – FOR THE PRICE OF ONE.

(SPECIAL THANKS to Hiram Lewis of Alpine Ski Center for including a mention of our SkiSoutheast Summit in their eBlast to more than 40,000 fellow snow lovers.)

I’M DOING THE NORMAL WEEKEND “TOUR” OF SKI RESORTS BY THE PERCENTAGE OF SLOPES OPEN TODAY.

As a SUB-TITLE to today’s “notables” I could add:

SINCE NO SNOW FELL AROUND MY NECK OF THE WOODS – I’M IN A GRUMPY MOOD SO I’M CALLING PEOPLE OUT THIS MORNING.

When I was updating the report this morning I noticed some conditions at various resorts from Friday morning – reporting Packed Powder conditions. Beech Mountain was one of those. I’m going to have to work with our man Kenny Griffin about negating those from our report. I can assure you that it was more Groomed & Frozen Granular – which is what is being reported in a widespread manner this morning.

Additionally, Sugar is evidently predicting some natural snowfall for later today because they are reporting “natural packed powder” this morning and as we reported in the resort-by-resort report below – the only “natural packed powder” at Sugar right NOW MAY be found in one of those little sugar packets on the cafeteria table beside your coffee cup. Of course, IT IS snowing now so maybe they figured they should go ahead and get a head start by adding it to their report. I mean THERE IS some natural powder on the ground – albeit perhaps a quarter inch.

Appalachian Ski Mountain – 33° – No New Snow; 7″ on the season | 100% Open with all 12 slopes and trails with Groomed conditions. App is reporting that they have not made snow in 3 days now. App has a 40-66″ base so they are in perfect condition for this weekend.

The Omni Homestead Resort – 27.9° – No New Snow;  8″ on the season | 100% Open with all 9 slopes and trails and Groomed conditions. They are reporting some “snog” (freezing fog) this morning. They are also reporting “packed powder” but there’s been no powder…only snog. They have a great base of 46″ and are not open for night sessions.

Also we’re glad to see that Omni has begun reporting a snow report ON their website. Fans can now see The Homestead’s snow report at: http://www.omnihotels.com/hotels/homestead-virginia/things-to-do/snow-report and that report is brought to you by SkiSoutheast.com. Woohoo!

Wintergreen Resort – 25° – No New Snow; 8″ on the season | 25 of 26 slopes and trails open with a great base of 40-60″ and they made snow overnight on almost every trail! They reported, “Accumulating ice overnight could cause some operating delays this morning.  Please use caution when moving around the resort, crews are out spreading ice melt and cleaning up.”

Snowshoe Mountain – 28° – 4″ of New Snow; 62″ on the season | 55 of 60 slopes and trails open with groomed and packed powder conditions and a base of 32-56″. They are reporting dense fog this morning AND some delays around the mountain getting lifts running and THAT is usually a result of ice. So expect great corduroy this morning and some powder conditions.

Canaan Valley Resort – 30° – 1″ of New Snow; 58.7″ on the season | 27 of 43 slopes and trails open with groomed conditions and a base of 20-30″. Canaan isn’t reporting the snow, but David Lesher of Canaan Weather is and his stuff is dead-on-official. He reported that it was raining and icy overnight and then some snow fell.

David Vance of Canaan Valley reports, “Bring on the snow. See you at today’s first Rail Jam out of Four Series. Let’s Slide and Ride

By the way – for you Cross Country skiers who have not had much to play on this winter (to date), Canaan is reporting some terrain open (about 5km of it). *Woods/trails have 2″-4″ coverage, open fields – thin coverage. Trails Open: 5km. XC Ski Center Hours: 9am – 4:30pm

Wolf Ridge Resort – 33° – No New Snow; 7″ on the season | 2 of 15 trails open with Groomed conditions. Wolf cannot CATCH A BREAK! Due to the rain and mild temps they lost 6-10″ off their base depth (now reporting 30-46″) AND their QUAD lift is down for maintenance which has them down to 2 of 15 slopes open. HOWEVER – I LIKE the way that Rick Bussey and their team are hanging in there despite a run of bad luck. They are reporting this morning, “Our quad chair is still down for maintenance. We are working to speed the process along. We will continue to run our double chair and carpet lift until such time as the quad is ready. On the brighter side, snow is in the forecast for the weekend and earlier part of the week.”

We’re pulling for you Rick…

Sapphire Valley Ski Area – 38° – No New Snow; 1.5″ on the season | 2 of 2 trails open with Groomed conditions. Sapphire was closed during the week and reported a base of 20-62″ LAST weekend and they are now reporting 12-54″. I DO like their snow conditions reporting of “Groomed & Packed…FUN!”